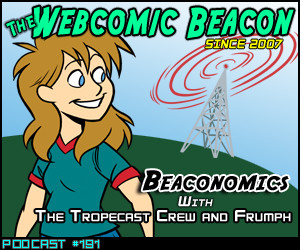 In this special Fesless main show, Adam Smithee and Tanya Higgins are joined by Comicpress developer and webcomics man-about-town Philip M. Hofer (Frumph) to to analyze several common webcomic activities from a cost-benefit point of view in the first ever session of “Beaconomics”.  Rounding out the panel are Tropecast regulars Mike Dellheim and Liz Statley.  They talk about what you really get out of a crossover, why webcomic navigation hasn’t changed in the last decade, and how people who steal copies of Photoshop are really undermining civilization as we know it.

I think About pages etc are essential to comics that aren’t one-shots, i.e. something long or story based, because you want to figure out if it’s something to commit to. It’s also handy if you haven’t read for a while and want to remind yourself about what is going on.

I personally always appreciate a minimal cast of characters. I also chalk up the “About” page to be where I can find any and all information not listed anywhere else (like contact information or other links).

I think the point here was that cast pages may not be “worth it” from a cost/reward analysis.

On the “cost” side of things, you have time and effort sunk into a page that a majority of the people reading your comic will never visit… or, on the flip side, if you don’t sink time and effort into it you have the ‘cost’ of a horribly out-of-date cast page that references plot points and characters that may no longer matter to the comic.

On the “reward” side, you have one of three situations – brand new readers, who ideally would learn everything on the cast page by actually reading the body of the comic itself; current readers, who probably know anything useful on the cast page anyway; or returing or absent-minded readers (as you mention) who may need a refresher. Of those scenarios, only the last one has any realistic payoff, and even then it’s nominal if the cast page isn’t actually up-to-date.

Do note, I’m not actually saying you shouldn’t do a cast page. I know people will. But it’s more in the realm of a superstition than it is an actual need – you should probably have it in case it would actually come in handy, but the chances of that happening are slim.

I will also throw out one significiant exception to this – if you participate in a lot of fan art exchanges, challenges, crossovers, contests, or other things that require other people to draw your characters on a regular basis, than a cast page is much more useful. If that’s the case, it should also contain reference material – good shots of characters, poses, links to signficiant appearances – to aide others in drawing your stuff without having to read your entire archive.