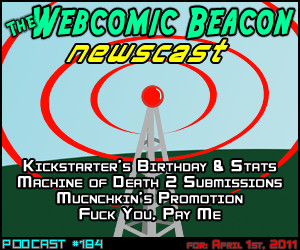 Rosscott and Eric Kimble are joined by Dan Potter (Walking the Lethe) to go over the news of the last week. Covering Kickstarter’s birthday stats, Machine of Death 2 open submissions, Hugo nominees announce, and much, much more.

Fuck You, Pay Me
Originally found on Night Gig. Mike Monteiro of Mule Design Studio gives a pep talk to fellow designers about protecting themselves from the cut throat world of business not really wanting to pay them.
(Original Source: SanFransisco/CreativeMornings via The GigCast)

Most Awesome Ad for a Pen Ever. The Metal Pen.
(Original Source: Vat 19 – via: Onezumiverse)