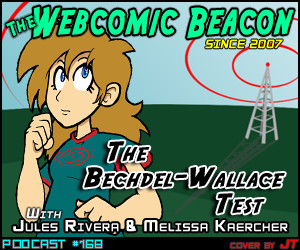 Jules Rivera (Valkyrie Squadron) and Melissa Kaercher (The Geek Life) join Fes, Tanya, and Mark to discuss The Bechdel-Wallace Test, aka The Bechdel Test, aka The Mo Movie Measure. As based on Alison Bechdel’s comic (Dykes to Watch Out For), and her friend Liz Wallace.

The test was in direct correlation to movies, but honestly goes for any form of storytelling:

1) There are at least two named female characters, who
2) talk to each other about
3) something other than a man.

But, of course, there’s much more to it than that, which is what we are here to discuss! … as well as going off topic much by the 3rd segment; including talking about sex, but that is what our listeners come to expect!

Cover Art by: JT (Between Failures)

The break song was Connoisseur of Girl TV by Bob Ricci | Notes: House of the Muses, Why film schools teach screenwriters not to pass the Bechdel test, The Bechdel Test: it’s not about passing, Eerie Cuties, | Milestones: Adrastus (100), Galaxion (200), Times Like This (400)

I’m not sure how appropriate the song I picked was, but it’s comedy, and I think it’s funny.

Great episode! I agreed with Fes when he said (referring to point 3 on the test) that it wasn’t about romantic relationships, but whether the girl characters existed only to advance the (male) protagonist’s storyline. Sort of a “Where’s Poochy” thing, I think.

And yes, the song was funny.

If this episode had been a drinking game and I took a modest swig every time someone said ‘Bechdel-Wallace’ I would have been very lucky to awake in a hospital with my stomach pumped and my blood transfused.

dont mean too know like a know it all or a smart as ive been in the US Army for 3 years and served 2 tours overseas in both iraq and afganistan over 30 months total lead men in too battle and well Females are on the EOD or as you called it bomb squads well there uslly better bomb tects and with the females thing being on the front line is so the males dont kill them and the terroists will try much much harder too caputure a female soldier alive then a male and worst of all over 60% of sexuall crimes in the miltary is male on male rap and those of only the reported cases and its beleaved that more then 90% of homosexual crimes are not reported . Sorry to sound like a dick but when people talk about my life and my honor i get pissed a bit . Love the show keep up the good work HOOAH.