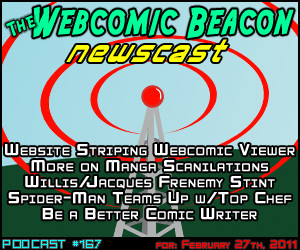 Carter Fort joins Rosscott, Alex Heberling, and Mark Savary for this edition of the Webcomic Beacon Newscast! We also have newshound Eric (Exiern) to thank for snooping out stories! Yet another Webcomic Readers rears it’s head, striping out website contest to show just the comic. Yet more discussion on Digital Manga Distribution. Plus a lot of tid-bits todayincluding references for getting started with comic creation, Spider-Man teaming up with Top Chef, and Jeph Jacques/Dave Willis frenemy situation with Penny and Aggie-gate!

Is it too late for for even free translated manga to prosper?
(Source: Comic Book Resources)

Mark Millar And Frank On Getting Started In Comics
(Source: Bleeding Cool)

Mark Sukerburg to be in a Graphic Novel
(Source: PC Magazine)

hi, i tried this webcomic reader script and have some things to comment about it from a readers perspective

– this script doesnt really steal the comics from your page: it runs inside your page and only changes the way pages are navigated. this means the reader will come to your site to read it and will see all the content you provide (blog, ads, etc). what IS lost is the content of the other pages, because when navigating the archives it only changes the image instead of loading the whole page (in some sites it even includes author comments or other “relevant” content)

– its free and contains no ads or anything like that, theres not even a donation option as other userscripts have

– it may even be good for small comics, because being in that list makes it possible for readers of other comics to know about it, and its a great incentive to know that it will be pleasant to read through it (i myself have randomly visited some of them and have liked a few that i wouldnt have known about if it wasnt for this, and im pretty sure im not the only one)

in the end, though you may lose ad hits from people not visiting every page of the archive, i think getting new readers makes up for it

True, but there’s also the fact that people make these websites and they want people to go to their websites, etc. I’m not a fan of ad-blockers (I don’t use it), nor RSS, because I love visiting people’s websites.

And being a browser script, it’s not like an App (like in the past), which stripped sites or their RSS feeds. (esp when the app is sold and is ad supported). So it’s not as “bad”.

Like with RSS, I really would prefer people to visit the site that I made. But it’s something that I’m not going to put energy in to fight about it. I’ll just say I disagree with it.

For The Webcomic Beacon, the MAIN thing I don’t want people doing is linking directly to the MP3, instead of post (or RSS), because I can’t count that in my stats. (or downloading and re-posting) I’m not sure if people ARE doing that, but I’d really like to know what my full audience is.

Webcomics are a savage, unfair market. But, of course, you have your thick, gray line between the hobbyists, the aspiring professionals, and the professionals (as in “profession” and “earning income”).

Again, the ONLY way I gain any money back on all of my projects, are the ads… of which I sometimes make $20 a month. Of course, I’m in the red all year. And I’m not the only one. But hopefully these readers are a small percentage and/or they end up supporting the creators in other ways as well.

If things like this contained 30% or more of someone’s readership (especially if we can’t track the hits), it would give a creator an skewed view of their audience. Especially for smaller comics. They may feel they are doing something wrong, get discouraged, etc. The best way to counter act thing like this, as a reader, is to support the artist in other ways: Do they have a store? Also leaving comic comments.

Comments would be a good one for readers, because it can help the perception that “hey, people do like this”, and reader feedback and interaction (even just amongst the readers themselves), only helps. We like to hear that people like (or hate) our stuff. It makes things more REAL. Like you aren’t just talking to the wind.

So I guess I’m not saying “don’t”, but saying “I’d rather you not, but if…”, because some things are just they way they are, and we can’t do that much about it, especially the small-timers. Of course, this is my opinion, as a heavy reader and multiple creator paying out of pocket for everything, with no returns. So take it as you will.