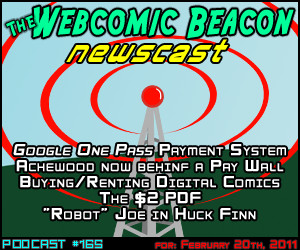 Eric Kimball leads Mark Savary and Fes in this edition of the Webcomic Beacon Newscast!

Overview of buying comics digitally
(via Robot 6 and Comic Alliance)

A Mexican Susih house stole the T-shirt design of the Alison Action (bearnutscomic.com) photoshoped out the severed human head and arms and used it as a mascot without permission.
(via post on webcomics.com)
(Original Art & T-Shirt vs The Thieves)

Bit.ly could go down if the protests in Libya intensify
(Source: Quora – via Bleeding Cool)

The achewood thing on fleen was a joke. The subscription thing is extras, blogs for the characters and process stuff. It’s not the main comic behind a paywall. The main comic just had not updated for a couple of months. Chris Onstad just had the bad times on a roll lately and it been rolling in a cumulative manner which adversely affected his sketcherations.

Second thing, the Huck Finn revision was from NewSouth who mainly did this to draw attention to it being pulled out of schools rather than actually a thing to sell the hell out of.

And Jane Eyre was done with zombies ages before Pride and Prejudice and Zombies. It was called I Walked With The Zombie. It’s a cool film and you should watch it.

I should do something about public domain characters travelling into the future to murder the people who “re-imagine” their tales as ironic genre fiction.

Thanks Beyla! I’ll try to remember than for the next show!