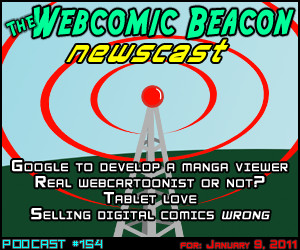 Jamie Noguchi, of Yellow Peril, joins Rosscott, Alex Heberling, and Mark Savary for this edition of the Webcomic Beacon Newscast! We also have newshound Eric (Exiern) to thank for searching for news and interest.

Apple iTunes releases Photoshop like product for the iPad.
(Source: The Daily Cartoonist)

[…] If you follow my frantic tweets, you know I joined the Webcomic Beacon crew, Ross, Alex, and Mark this past Sunday for their live webcomic newscast. Fortunately, if you missed it, they recorded the audio and it’s up for listening! […]

I enjoyed this podcast more than the last Newscast. And, as a non-comic artist, just a reader, I do like to hear about the news and views.

With regard to the issue of whether there is any difference in reader levels between Mon-Wed-Fri and Daily updating, I have to disagree. Both ‘The Life of Nob T. Mouse’ and ‘All over the house’ went five times a week from three times a week last year. Both have received a significant increase in traffic, which occurred shortly after the upgrade in post rate.

Based on my experience (which is of course only two comics, I admit) I have to say that more updates during the ‘get readers’ phase definitely means more chance of catching readers with a comic that appeals to them.

[…] so I’m woefully behind on my podcast listening. That includes this week-old episode of the Webcomic Beacon, which comments on my post on webcomic business wisdom from two weeks ago. Scroll ahead to the […]