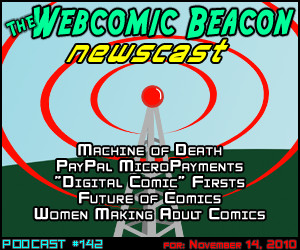 Fes is joined with Rosscott and Alex Heberling for this first episode of the Webcomic Beacon Newscast programming! We also have newshound Eric/Drowemos to thank for snooping out stories.

Comic news & Discussion: We talk about the Machine of Death book and the griping of Glenn Beck. PayPal has finally introduced a micropayments system with more reasonable fees. Several digital comic firsts including Rob Liefeld, Heavy Metal, Stan Lee and MTV. Also an interesting happenstance with 4Chan and the comic Underground. Finally we talk a bit about the future of comics, and webcomic women getting into adult comics.

For once, “Sweet Zombie Jesus” isn’t the appropriate thing to say.

Actually, there’s one point I wanted to make about those Ten Rules articles. Both of them seem to be of the opinion that girls rule the webcomics (or at the very least that men need to pick up their game), which would be fine if it was true. However, I started thinking about some of the most well known and (I’m assuming) most successful webcomics out there. Just off the top of my head, I came up with PVP, xkcd, Penny Arcade, Sinfest, Mega Tokyo, Ctrl+Alt+Del, Penny & Aggie, Saturday Morning Breakfast Cereal, Something Positive, and Sluggy Freelance. And who writes those? Oh, yeah… A bunch of guys. Maybe my list is arbitrary. Let me know.

I would love to be proven wrong here, but until I am, I have to question the criteria that both of these lists make about the female dominance in webcomics. Both of them seem to think that if the women are outnumbering the men, they must therefore be setting the world on fire.

–: I am really thankful to this topic because it really gives useful information “~-