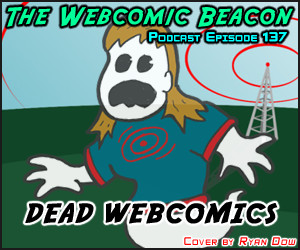 Fes, Tanya, and Nate to discuss DEAD WEBCOMICS! … as well as some Halloweenish comics. We start with talking about New Twitter and conventions, but roll into webcomics dying off. There’s also good tangential commentary!

Thanks for mentioning Crossoverkill. Yes, it’s mostly the same guys working on it. Al Schroeder, Ben Carver, and Dan Magee are all on board. Plus they got me doing a few pages. Remus is still floating around somewhere. It’ll be a little different, but those familiar with the previous crossover will be right at home with this one.