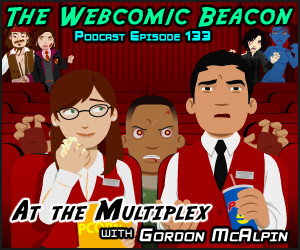 Gordon McAlpin (Multiplex) joins Fes, Tanya, and Mark to discuss movi– talk about printing a comic in a large scale with offset printing. Lots of great information on getting a book printed… we also talk about movies. We talk much on 3D movies and also of Scott Pilgrim vs. The World.

Great episode…but now I have to smack Fes upside his fool head for actually liking those stupid Jackass movies. 😛

In fact, I think you need to write a story for Ardra, where Ardra (who would hate that sorta thing) get obsessed and so into social media games, that Lenore and Eileen have to help her with her addiction.

Also, sometimes you just need some stupid comedy BS. It’s good to simply “check out” once in a while.

could you post a link to those chinese printers?

Farmville, sir, does not offend me, because it isn’t on the wrong side in the war of stupid people vs. smart people. It is merely neutral, like Switzerland. 🙂

In other words, I’d date a woman who plays Facebook games, but not one who likes Jackass. She has revealed herself to be poor breeding stock. I really should publish the requirements for proper breeding stock one of these days…maybe if I ever get a chance to do that Ardrienne spinoff.

@Jason, oh no, it isn’t neutral. It’s precisely what is wrong with social media like facebook. What it does is prey on the social interaction dedication, in order to keep you playing. It is manipulation at it’s finest. Farmville is as bad as WoW because of the social element. WoW is much easier to resist without social connection and obligations. You’ve fallen into that like many people. You don’t play it because it is necessarily fun, but it’s the “I’ve put so much into it” reasoning.

This is why I prefer pick-up and play games with no obligations. Jump in, play a bit, and be on your way… do homework, make comics, etc… y’know, something constructive that produces a tangible result.

Well, I play it for fun…but I can’t speak for others. It all depends on how you play it, really. Personally, I think the people who actually spend money on it (yes, some actually do) are nuts, but hey, whatever. As long as you don’t let it interfere with the rest of your life, I don’t see the problem, though.

As for the “putting so much into it”, a lot of games are like that to a point. Ever play Final Fantasy? People spend hundreds of hours on those games.

The only way it gets annoying for me is if you try to “friend” people who aren’t even playing the game. That’s a social don’t, IMO.

But you must remember the important point here. If I do it, it’s okay. If I don’t, it’s wrong. 🙂

I can’t believe you are comparing Farmville to Final Fantasy 😛

Also, the Harvest Moon games were always better, if you want a farming sim, with story, and an end.

I wasn’t…just saying that both are games that people spend hours on. Really, what’s the point of ANY video game, if you want to get technical about it?

But enough of the Farmville sidetracking…what’s the point of stuff like Jackass? If you want to laugh, put on something like Hot Fuzz, or MST3K, or old-school Simpsons, or something. Even South Park or Family Guy would be better, because they at least put some social commentary in with the lowbrow.

Jackass, at its core, if people doing stupid stuff. It’s not all great, but it’s a matter of ridiculousness. Part of it is seeing what they are going to do next… and unlike random YouTube idiots, THESE GUYS have a BUDGET.

It’s also good mental-check-out material. Having to think all the time is tiring, and I need to be able to just be entertained in the most simple way.

I don’t watch the show, or own any DVDs, but I’ve at least seen the first movie once or twice when it was on TV. I’m not really a fan, but I’ll watch it if it’s on, because there’s sometime really great pranks. I consider it a treat, but nothing I gotta have.

I also like that Jackass is in 3D, almost specifically to spit in the faces of those that are trying to peg 3D movies as the direction everyone should go into. Hell, I’ve seen some really bad 3D to where it’s outright laughable, but it’s not there to (specifically) be funny. (Seen the Journey to the Center of the Earth with Brendan Frasier), and that’s just out of the recent stuff. Like “Ooooo! It’s THREEEE-DEEEEEE! Oooo!”.

I’ve also not bursted out laughing so hard for a trailer for a long while, so obviously they got something right. I mostly want to see it (in the theater) as an anti-statement to 3D.