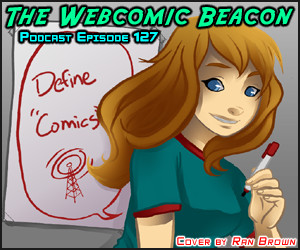 Adam Knave (Things Wrong With Me) joins Fes and Mark to discuss what it means to be a “comic”. There’s talk about Will Eisner and Scot McCloud’s definitions. Ben Carver calls in once again and argues his definition of comics, much fun had by all! We also talk about a bit of Scott Pilgrim and ComicCon.

I too am gonna call bullshit on Ben’s bullshit definition of comics. I think we’re being just a tad elitist, Mr. Ben. How’s the weather up on that pedestal?

You knew you were in trouble the moment you chose this topic, didn’t you, Fes?

Well, Ben is certainly unwaivering in his own world, but can talk up a storm, and is good for talkin’ and debatin’ material. Guess what? He’s gonna be on the show (at least partially) two more times this August, I believe.

I came across this quote the other day:

“For me, there exists no absolute definition of comics: different social groups (editors, artists, readers, censors, printers, teachers, etc.) participating in the existence of the medium will forge different working definitions, by selecting and generalizing the traits that are pertinent to their way of participating in it.”

I don’t know who the guy is, but I think he’s spot on.

Then it must come down to sub-definitions, i guess 😛

Hey guys, I just heard the podcast and I loved it. I just finished my master’s thesis on webcomics so perhaps I can help. Many comics and webcomics count as forms of serial fiction, wherein the publication format affects narrative construction. They are read as serails while they are still being published. After that, you get compilations, the archive serves as a giant compilation of sorts, wherein you can read the work in its entirety, but you miss out on the serial reading experience.

There are other comics that have a story, but nothing really happens on it. This is what Umberto Eco calls “narrative redundancy” wherein there is no overarching cause and effect relationship between the events of each installment. This is considered more a series, rather than an actual serial. Publication schedules, or a lack of one, affect both the narrative construction of the cartoonist and the serial reading experience of the reader. Sometimes it’s the author being lazy but other times you can get some pretty interesting elements when not having a defined publication schedule. If you have the characters in a scenario where things are happening quickly without much time to grasp the situation then publishing in a very quick manner (daily or so) can make your readers feel the same way. If the characters are lost in the middle of the desert with no clue as to what to do next, you can transpose that feeling of doom and uncretainty unto the readership by not updating for two or three weeks.

I got lot of other stuff on the narratives and texts of webcomics so feel free to contact me if you need any extra info.

Other stuff? Like maybe a whole episode’s worth of stuff????

Particularly an episode on narration, or update schedules in general? Because we are planning one!

I have no idea if it’s enough for an episode but I’m happy to help. My Skype connection leaves a lot to be desired but I guess I can be available if need be. Contact me at gromaguera@gmail.com and let me know what you wnat and you need. I can even forward an almost finished version of my thesis for preemptive deliberation.