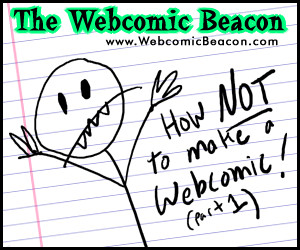 Adam Smithee (Apple of Discord) joins Fes, Tanya, and Mark to discuss five of the ten things you shouldn’t do when making a webcomic.

News: Estrus Enterainment is looking for colorists and other artists to draw Adult comics (web and print).  If you are not comfortable with X-rated or pornographic subject matter please don’t apply. Go HERE for more information and the application requirements.

Great episode! Wish I could have listened to the live show. Hopefully, I’ll be able to hear Part 2 on Sunday. Hey, I was a part of the original Penguicon discussion panel, at least!

Going on to another topic you discussed: For the Estrus thing (which was more of a “let’s see how good I can do with bucket fill” entry than a serious one), I made the “sexy girl” more tan, with sort of light red/strawberry blonde hair.

The glasses girl…ended up looking like Della from my comic. Yep, I’m that pathetic. 😛

I found the past equating Furry comics to sprite/photo/gamer comics really offensive for some reason… I know Fes voiced some disagreement within the cast about it, but it didn’t feel like really enough.

Then again, I don’t see the so called “difference in quality” between a Furry comic and your average Manga comic, either, so maybe it’s just me…

Am I the only one that sorta wished that more sites were actually named that are considered to have bad practices? One or two examples were given for some of the points, but not all of them. I know people want to avoid drama, but I think it would be helpful to give more specific examples 🙂

@ Rachel > I think the main point of that was to make clear that Furry (and other types mentioned) are NICHE comics/genres, and typically do very poorly over wide audiences… He even mentioned Photo Comics, and there are indeed some of those that are awesome as well… but again, mainly niche.

@ Rachel – As the former author of a Sprite comic, I can sympathize. One of the uphill battles I constantly fought (and lost, btw) was trying to overcome the opinions that others held of *all* sprite comics, whether or not they had ever read mine. My rule of thumb for this suggestion is for people to start general, then specialize as you learn what works for you.

It was actually the difference between the fight that I had to do just to get even the slightest bit of recognition with my former sprite comic compared to the relative ease that I’ve been accepted into the community and have gotten to do, for instance, awesome podcasts like this that is one of the original driving forces behind the “How NOT To” list.

While Furry comics do not suffer the same type of stigma that sprite and gamer comics do (99% of them are bad, and the 1% that aren’t are rarely worth the time and effort required to sort through and find them), they do still have a degree of “price of entry”. A lot of people automatically equate having anthromorphic characters to furry, to fursuiters, to yiffing… and then it just goes downhill from there.

While the overall furry community is fairly supportive in-and-of-itself, the question is whether or not it’s supportive enough to hold up the fragile psyche of an unconfident inexperienced first-time webcomic author/artist who’s just finding their way in the world.

Ultimately, if it’s your passion, or you’re really good at it, I say go for it (see Rule 10). Otherwise, if you don’t “need” those characters to be talking humanoform animals and you’re just doing it to be dynamic or visually interesting, you might want to reconsider.

Of course, what a great site and informative posts, I will add backlink – bookmark this site? Regards.

Hey, I was just wondering what would happen in the reverse of the “I’m going to start a webcomic” What I mean is that the comic starts off when the character has already had a comic going on and decides to QUIT instead. So the plot goes on following the actions that happen from there.

oooooh A good idea. I *think* we’ve talked about it on one of the shows already… But could be worth a revisit…. if I remember. You can email use with show suggestions.