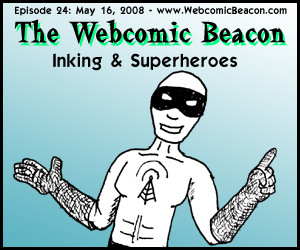 WOW! A long show this week as we have Ben Carver, from Point Guardian, join Fes, Tanya, and Aaron to talk about Inking as well as Superhero Comics! And with discussing inking, we talk about print comics as well. A great listen for trade comic fans as well!

Ed of Meiosis sends us an e-mail. Mark Savary also talks a bit about minimalist comics while reviewing Prodigy Grey; and Peter Turkulich give his impression on The Chronicles of Avernyght. Plus the weekly Strip Fight Ringside Update!

Milestones this week are: Introspective Void hits 100 strips and Hitmen for Destiny hits 100 as well.

For some extra goodness, head over to Sugary Serials and check out a Saturday Supercast podcast featuring Diana Nock, who once did reviews on The Beacon. Also, check her Sugary Serials comic contribution: Imaginary Friends Forever! You can also buy the Sugary Serials comics in print on the cheap, and they are awesome!