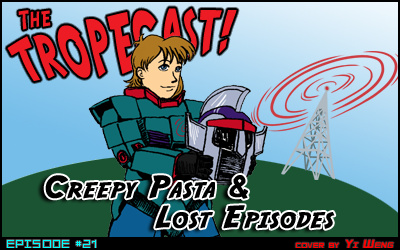 CREEPY PASTA and LOST EPISODES this week! Join Adam Smithee, Liz Staley, and Michael Dellheim in this edition of The Tropecast!

Al Columbia started his cartooning career as an assistant for Bill Sienkiewicz who was illustrating a series for Alan Moore called Big Numbers about a huge mega-mart retail store moving into a small community and disrupting the local economy. Unable to continue producing photorealistic art on the sort of time frame Alan Moore required Bill gave most of the duties to his young protege. Al takes over and manages to finish one issue but says that it is a disappointment and does not turn it in. Alan Moore’s series gets cancelled.

He follows up his failed stint on Big Numbers with a single issue of a comic called DogHead, which goes out of print when the small publisher putting it out goes out of business.

After seeing the huge effort put into extremely realistic art vanish, he takkes scissors to all of his art, including the Big Numbers issue and turns it into collage album covers for limited edition singles by Frank Black which never get released in America.

He gives up on photorealistic art and starts working in a cartoonish style similar to old Betty Boop cartoons, though with a horrifying edge. He’s had many projects announced in the decades since his breakkdown producing Big Numbers, but he usually just shows a teaser page or two before it gets cancelled.

Finally, a few years ago there was a collection of his work entitled Our Golden Bear Days (Artifacts and Bone Fragments) filled with images of him and his first girlfriend drawn as small children, with a closeness between the two suggesting incest. In story after story the two delivered murder and affection upon each other with little regard for continuity, like a sexualized version of the Roadrunner and Wile E Coyote. The term stories is used loosely, for there is a scrapbook quality to the work.

A lot of the stuff is pencil only, or only partially inked. Some of it is out of order. More than a couple pages show evidence of being torn apart and taped back together before scanning with no clean up afterward. The closest anything ever comes to closure is the close up on the girl’s unmarked grave on the last page.

I purchased a used copy a couple months ago when I saw amazon didn’t have any copies in stock. The price seemed decent and the condition was listed as new so everything seemed good. When it arrived the book couldn’t shut because the pages were swollen from sever water damage and there was nasty mold throughout the book. I contacted the seller about the condition the book arrived in and he told me that what I described was “new condition” for that title.

Creepiest trope cast to date! Interesting show guys, i was unaware the such a thing as “creepy pasta” existed.

Creepiest? Then you have not found the lost episode 20.

I thought we weren’t going to talk about 20 anymore. Mike is still whimpering.

It isn’t funny… stop pretending we have it somewhere, you said you deleted it!!