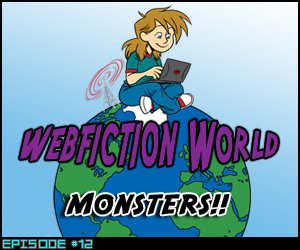 SGL (Tales of the Big Bad Wolf) joins Greg X. Graves to talk to you about MONSTERS!

Notes: Article on Chinese web-it writers that have been profitable for a while now.

[…] to know what I sound like, you can listen to me ramble my way through the Webfiction World podcast here. I believe we were supposed to be discussing monsters, but I think we might as well have been […]

If Anna didn’t make it out of that subway car, we’ll have to scrape up what remains we can, and salvage enough DNA to be able to clone her. Then, we will also have to train the clone using interpolated brainwave patterns.
The clone should be almost, but not entirely, completely unlike the Anna Harte we all knew and loved.

Or we could just bring over another instance of her from an alternate universe, say, one where one random electron suddenly decided to collapse in on itself, and somehow implode outwards into an inverse positron. Or, maybe one that is a bit more divergent: one where three leaf clovers are considered lucky, or one where the three primary colors are perceived as vermilion, teal, and chartreuse.
That’d work too.

(By the way, it shouldn’t be possible to turn MCM into a zombie, given his current state. At least not from the Solanum virus, anyway. That’d just kill him. I guess you could turn him into a prinny though…)

As long as the clone of Anna has that accent of hers, I will be satisfied. This is the second time I think we have missed paths for a recording!

I’m rather amused by how MCM is more a character in his absence, rather than in his presence.

And in a random note, I suppose I should list some of the books that I casually threw in there that might be somewhat obscure.

[…] I talked a little bit about my artist alley experience in a podcast at: http://www.webcastbeacon.com/webfiction-012-monsters/ […]