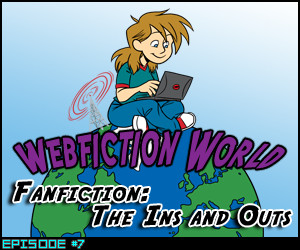 C. S. Kay (Suxy’s Box, Creative Wenches) joins A. M. Harte and MCM to talk to you about *gasp* FANFICTION! Also, Fes took some liberties and injected a fanfiction reading into the show without Anna or MCM’s knowledge!

Reading: When The Bus Stopped by Donald Conrad. Also Half-Life: Full Life Consequences by “squirrelking”, read by an unknown reader.

Music: I Ate All The Food by Furries in a Blender (The Violet Kingdom)
*320k, Bass-boosted MP3 available for purchase.

[…] Hi guys – In light of the podcast that went up featuring CSKay and her thoughts on the links between fanfiction and webserials, thought we should more properly introduce ourselves to bored link-clickers. In case you don’t know about this podcast, please visit the WebBeacon Network page for Episode 7 here. (http://www.webcastbeacon.com/webfiction-007/) […]

FYI – Before the web was formalized, online fanfic was often posted in USENET in the rec.arts.fandomname.misc or *.other categories or more likely in the alt.* hierarchies groups (Which were more permissive in posting of content.).

Some of the oldest online fanfic could only be found that way 🙂 (And fanart as well.)

Could you do an epidose about Friendship is Magic fanfiction at some point?

I don’t think there are any plans to look at any specific fanfictions. But I would not say “no”. Just maybe not right now. Then again, Anna is in charge of this program 😉

[…] entertainment: The creator for Suzy’s box pinch-hit this week as a guest commentator on a Webfiction World podcast. She actually let some information out about Creative Wenches and our super secret ninja […]

@Rilkar I think we’ll leave a fandom-specific show for another time perhaps. We do want to look mainly at original fiction online, but that doesn’t meant that at some point down the line we couldn’t break from tradition… or find a way to relate Friendship is Magic to webfiction!

…. or do a whole new program centered around fanfiction 😉 😉 😉

…. Of which I would consider… Might look into new hosts for that though. I wouldn’t drag Anna or MCM into it if they didn’t want to 😉

Ahhh, you had to include full life consequences. Also I’m pretty sure the fic Anna was after was My Immortal (checking, it’s apparently HP not twilight), I’ve not read it, I started clawing my eyes out a paragraph in or so.

I’ve found reading a lot of anything well, ‘bad’ helps my critical skills. Being presented with obvious flaws over and over well, makes you notice the damn things. Even when it’s done better elsewhere, it might still be a weakness. So yeah, lot’s of middle of the ground/bad fanfiction worked there. :p

As for one reason new writers start out with fanfiction, could it be that they don’t consider it to ‘count’?

@Fes I’d be happy to guest on the show, but I think if I hosted Fanfiction World I’d no longer have a life!

@Robin I think my editing skills really improved by reading fanfiction. I used to beta a lot of people’s work, too. And I suppose you’re right — I never thought of fanfiction as ‘real’ writing. But I know some fanfic authors who do take it a lot more seriously than I did!

It’s interesting to hear something about fanfiction from someone who actually likes it.

Personally, I’ve never had a big problem with it, but I haven’t read much of it either. I think the most I’ve ever read was as a result of some blog that had a “bad fanfiction Friday” or something like that. I remember reading some awesomely bad fanfiction there. For example, I vaguely remember something involving sex with a pokemon that included bad grammar, poor word choices, and of course, amazing spelling.

That said, I very much enjoyed a story Robert Rodgers wrote using my characters that he described as fanfiction.

So that’s kind of cool.