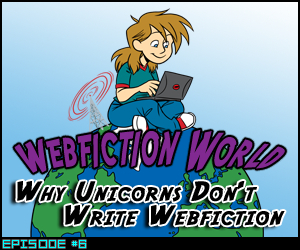 Erin M. Klitzke joins MCM to talk to talk about writing webfiction and a bit about fanfiction. Anna is gone this week.

With regards to updating regularly, I think I did better early on than I did about a year and a half ago. Early on, I mostly hit the day I intended to update. At worst, I sometimes updated late on that day–say 9pm or so instead of 12am.

I tended to record that in the notes before the update, however, so it gives the impression of being worse than it was.

I was far, far worse in my second and third year. Then I consistently updated the day after I said I would. When I officially switched days to the day I was actually updating, I started updating the day after that.

I blame it on running my own business, something that expands to fill all the time you let it control. Currently I’m doing web development for other people, and so I do much better now.

The key point was that I was consistent in that there were almost always 2 updates per week, and when they were late, they were late in a predictable way.

Hey… If you’re looking for suggestions as to topics, I’ve got a couple:

1. The influence of Tales of MU. You might try to get Alexandra Erin, but if you can’t , you’ll be able to find a lot of people affected by her work. By affected, I mean they started doing web fiction due to Tales of MU.

2. Superhero fiction: Outside of movie tie-ins, it doesn’t exist in bookstores, but it’s much more common online.

Admittedly, the second one is a little self-serving, but that’s okay, right?

That was my bad–dates =/= not Erin’s strong suit!

I love the second topic, though!

[…] of…I was a guest on a podcast that’s available streaming here or as a download from iTunes.  It was a lot of fun, and I love the Webfiction World folks.  They […]

Loved the outtake at the end! ;P