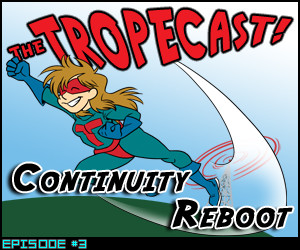 I feel as though I need to set the record straight here.

Yes, it is true that I have rebooted Galaxion three times, but none of those relaunches were done because I wanted to redo the characters or alter plot lines because I’d run into problems or anything like that. All of my reboots were about changing FORMATS.

When I moved from novel to comic, that was a pretty major change and there was a lot I needed to rewrite to accommodate the new medium. But because I originally wrote and drew the comic as 14-page minicomic (or “digest”) sized books, when I decided to make the move to full-size comics (which I could get distributed to comic shops), I had to rewrite my stories as 20-page chapters instead. It didn’t make any sense to try and tap into that market starting in the middle of the story, so I began again at the beginning. Finally, after a long family-centered hiatus, I relaunched again on the web. Figuring that I’d lost all my readers during the long break, I started over from the beginning once again.

Each time I relaunched, however, I took the opportunity to tweak things a little to make the comic better. So the story did change each time, and the art improved, but that was never the driving force behind the relaunch. Yes, I annoyed my readers, but the format changes made it unavoidable. Believe it or not despite all the relaunches there is a solid group of them who have stayed with me since the very beginning.

In hindsight, though, I realize the final reboot– the one where I began again online as a webcomic– was unnecessary. I could have posted all my old comics as an archive and picked up where I left off. I just, er… didn’t know back then I could do that. I know, I know, I’m an idiot, but it’s too late now. It’s a bit frustrating all around, but at least I’m pleased with my new work. 🙂

Would you say that any of those reboots were much of CONTINUITY reboots? I know you took out a scene in which the crew ran into local animals before the natives…. But were the continuities severely changed in any way?

There were a few of what readers of both versions would call quite significant changes between the 1997-2000 version of Galaxion and the 2006-present webcomic … although I think of them more as “plot restructuring” rather than “continuity changing.” I see things a little differently than they do because I know the plot of the entire story, whereas the readers can only know what I’ve published so far. I’ve tinkered with the story, but it’s still moving in the same direction as before. I’m not sure if that falls within your definition of continuity reboot. 🙂

But continuity reboot or not, my point was that the relaunches were not arbitrary decisions based on some personal dissatisfaction with my comic. I did them in order to accommodate the format changes and the new marketplaces that went with those formats. For whatever that’s worth. 😉

We really weren’t trying to judge with the Continuity Reboot label – some people may assosciate it as a negative stigma, but to me it’s just another difference between writing “live” vs “delayed”.

A person doing a novel, for instance, has the luxury of deciding on page 281 that they want/need to change some substantial fact about their work’s history that occured on page 14 – a person on comic 281 does not. They either douse the comic in retcon, simply ignore the inconsistancy, or (if enough build up) reboot and hope for the best. It happens.

Your situation is more unique, due to the formatting and all of that, but I still think the Continuity Reboot applies because you do go back to the beginning and re-tell it. Even if the changes you made are minor and don’t change the overall plot, it does change both the story and the perception of it for the readers.

I guess my best definition of it would be… if Batman is fighting Mr. Freeze, who died/went to jail/was sealed in a glacier/shot into space last time Bats fought him with no apparentl explaination for how he got free or why he’s rampaging through Gotham AGAIN… that’s a Reset Button/Snap Back/Retcon. If Batman is fighting Mr Freeze for the first time EVER, it’s a Continuity Reboot.