Q1: What is ‘Callous‘ the comic strip about?

A1: Wow, over the years that has become a loaded question! Ha ha!

Primarily, “Callous” is about the life and times of Dr. Rianne Nicah, a struggling new physician, who also happens to have a Guardian Duck named Cal Duck. Throughout the years of studying and training to become a Family Practice with Obstetrics specialist, she never really got to discover herself as a person and the world around her. Cal showed up to help guide her to become the best person she could be by opening her eyes to everything she ignored within herself, the medical field, and the world we live in.

That’s all well and good but there is a catch. Cal isn’t invisible. It’s also his first time to become a Guardian Duck so he is often accompanied by his on-the-job mentors, Mallard Duck, Decoy Duck, and Ling Duck, who all have the ability to pop in and out of our world to guide Cal. In the effort to maintain as normal a life as she could, Rianne has requested that the ducks remain within her home to which they reluctantly agreed. Nevertheless, she has gained good friends in her otherworldly housemates.

However, for one reason or another, Rianne would occasionally be transported to the world of her Guardian Duck friends where she’d find herself in the middle of fantastic adventures! But that aspect of the series is a totally different monster to talk about!

Q2: Why Ducks? Do you have a pet Mallard or something?

A2: Ha ha! No, I just find them cute. I guess it started back when I was still in elementary school. There was a petting zoo in my school and it had a little duck pond. The mother duck was actually pretty accommodating and even let us carry her ducklings. I would find the way they waddle about and even their quacking kinda funny but I would marvel at how graceful they are when in flight.

Since then I’ve had a thing for cartoon ducks. Ducktales, Count Duckula, Disney’s Donald Duck, Wade Duck from Jim Davis’ Orson’s Farm, and even Marvel’s Howard the Duck were notables from my youth. However, my absolute favorite would be Daffy Duck of the Looney Tunes gang. So it was only a matter of time when I’d come up with my own cartoon duck! 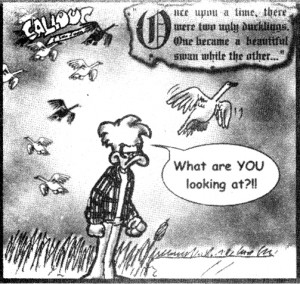 Q3: How does Cal Duck help Doctor Rianne Nicah to become ‘the best person she can be?’

A3: Before Cal appeared in her life, Rianne was a very closed-minded person and an extreme creature of habit. Perhaps it was due to her focus on advancing her medical career, which is fair, but it nevertheless hampered her personality’s development. Cal’s sudden arrival into her life was the first catalyst in her breaking out of her prison of routine. So bit by bit Cal would entice her via passive suggestions to break her instinctive routines, all through her own volition, so that she’d be exposed to new things. These things have an effect on her character and help her grow.

These “new” aspects of her life with Cal can range from simple, everyday things to major decisions. They can be as seemingly miniscule as changing the color of her ballpen from black to blue or quite grand like opening herself up to a meaningful relationship.

Hence, the tagline of the series has been “Brave the World”. To find yourself by opening up to all that life has to offer. There are aspects that she might not like but she’d never really know until she experiences them herself. She might not become the best person in the world but she’ll definitely aim to become the best “Rianne” she can be.

Q4: I see you recently launched a new webcomic, M.O.U.S.E. Tell me about it. 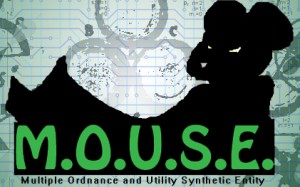 A4: M.O.U.S.E. (Multiple Ordnance and Utility Synthetic Entity) is about a brilliant robotics and cybernetics student who was mistakenly assigned to intern at a mad scientist’s laboratory. It’s a big fantasy/sci-fi/adventure tale and I’m really excited about it! I’m also extremely fortunate to be working with Pilar Esber as the series artist. She’s brought a sense of energy and fun through her art which makes the comic quite rich in character.

Q5: What is it like working with another artist versus making a comic solo?

A5: When working on Callous I’m able to portray exactly what I imagine. With M.O.U.S.E., I let Pilar have control of what everything looks like, including how my story flows through the page. It’s a different kind of thrill, like watching a theatre group perform a play you wrote or like seeing how a guest artist draws your characters. The way Pilar has been interpreting my writing is fascinating and is ultimately rewarding in itself.

Q6: How did you first get into making Comics?

A6: I used to spend the long, lonely summer days by drawing comics in empty notebooks. I used to read a lot of Archie books and newspaper funnies and those taught me the basic fundamentals of comic-drawing and story flow. Then one day, on a whim, I applied to be an artist for my high school newspaper and drew comic strips there. That was my first taste of having my work published. I also joined my University’s student paper and started Callous comics in 1996. I brought the series with me to my medical school newspaper and continued Callous there, albeit revamped. 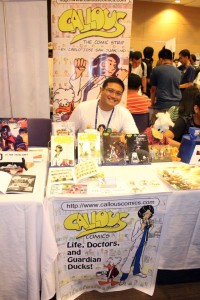 Q7: How do you juggle being a Doctor and a Cartoonist?

Q7: It’s all about time management. I collectively put in around 2-4 hours a day working on the comic. But those hours are squeezed into my daily life as a physician, father, and husband at various times of the day. Pretty much a “do whatever I can whenever I can” state as I wouldn’t know ahead of time when I’d be able to work on the comic. So it was important for me to streamline my process as well as to keep my comic production necessities mobile.

For example, I have a blue pencil, a small eraser, a small ruler, and an inking pen as drawing materials and that’s it. Having only one pen “forces” me to adhere to “ligne claire” linework, which I self-studied to use effectively. I have ready-made three or four-panel and Sunday strip templates in an MS Word file so whenever I’m free I just print out those panels onto a letter-sized paper and pencil away and ink on top of the initial sketches. While I do have a portable scanner and laptop ready (for slow days at work) I usually scan, color (mainly flat fills, no time for shading), and letter in my home desktop after dinner when the kids are asleep. I then upload the finished strip to the website and do a bit of marketing (like scheduling tweets).

Q8: What are your main inspirations? 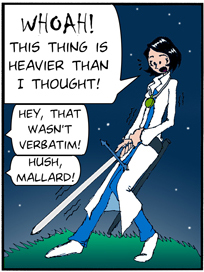 As for the writing, I look up to Walt Kelly (Pogo), Charles Schultz, and Bill Watterson’s (Calvin and Hobbes) work, particularly how they deliver their humor and in a sense how they “dance” the basic four or three panel rhythm.

When I seriously entered the world of webcomics and eventually moved the series on to color, I looked at Hergé’s use of color to coincide with his straightforward linework as an initial starting point to work from. From there I’ve been teaching myself coloring, philosophically inspired from a comment by Eddie Pittman (Red’s Planet) on his own work, attributing it to experimentation and luck!

Q9: What’s the most interesting thing ever to happen to you at a comics convention?

A9: Wow, that’s a tough one as so many interesting things have happened to me at comic conventions in the last few years. My short yet memorable chat with the late Tony DeZuniga (Jonah Hex) definitely ranks high up there. I also remember a lengthy discussion about cartoon ducks with a con attendee which was wildly stimulating. But perhaps the most interesting and most surreal is when Gerry Alanguilan (Elmer) passed by my table and I asked him to sign a comic I contributed to that he drew the cover for. While he was doing so, suddenly, David Lloyd (V for Vendetta) came by to chat with him and there I was standing next to these two heroes of mine absolutely stunned and speechless and trying my best not to show it. So starstruck and caught off-guard I was that they were right in front of me and I had no clue as to what they were talking about. Eventually they walked away with a mild degree of urgency, still chatting, and I sat back down at my table, probably forgotten but I didn’t care. I smiled to myself the way one smiles just enough that the personal knowledge of the smile is there but no one else would notice it. Finally, an attendee came by inquiring about my comic and it was back to business as usual. 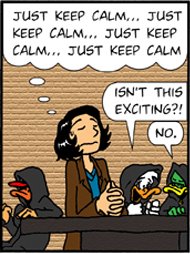 On another semi-related note, my wife lined-up to have a copy of the V for Vendetta trade paperback signed and sketched on by David Lloyd as a surprise for me. However, instead of the iconic Guy Fawkes mask everyone else seemed to ask him to draw, she asked him to draw a duck. And he did.

Q10: Okay this is the last question and it isn’t really a question. This is open mic – Your chance to say anything else you want to say about ‘Callous Comics’.

A10: I actually wish I put more thought into the series title. Just before the second strip was going to print, my editor wanted me to think of a permanent title for the comic. After hours of thought I grabbed a dictionary, dropped it on a table on its spine and as it opened up the first word I saw was “Callous”. I thought it was cool and edgy, which was what I was going for at the time, so I went with it. I also didn’t really think the title was all that important either. Midway through the college paper run I began to grow tired of writing caustic humour and realized I wanted to write something more “me”. I gradually shifted the comic’s flavour to an all-ages one. However, “Callous” had already developed a small following so I kept the name. 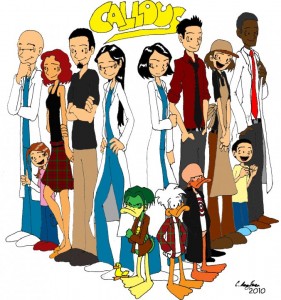 I now think of the title as a reference to the medical condition as opposed to an adjective so that it somewhat applies.

Nowadays, especially in comic conventions, I understand the power of a well thought-out name. I envy titles like “Zombies in Manila” which tells you pretty much everything you need to know at first glance. Whereas with “Callous” I’d have to give a lengthy explanation of the series to every potential new reader.

Nevertheless, I’ve gotten wonderful feedback from regular readers who now have a fond association of the word to the characters of my comic and over the years it has grown its own special place in my heart.

Thank you for the interview Carlos and good luck with Callous Comics and M.O.U.S.E.

Or do you have a webcomic? Interested in being interviewed? Get in touch!