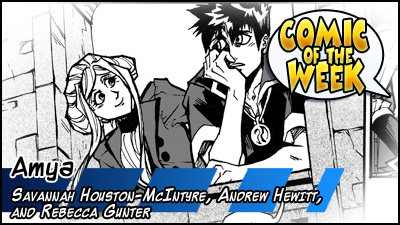 Amya is touted as a “high-fantasy graphic novel”. I had interviewed Savannah once, and learned that the comic is based partially off of a table-top role playing game she and her friends have played. Though I have to say that it doesn’t really show. There certainly is a heavier emphasis on drama and character development, versus “encounters” for dice-chucking. You really get a feel for the characters.

Though the story subject isn’t really my cup of tea, this can certainly be something for others to enjoy. The thing that gets me the most about this comic, is the art style. Yes, I’m not a big fan of non-color comics, but this is a fantastic mix of black & white line work with grayscale and some screen-tones. Beautiful artwork that makes me joyous when I see a colored peice of art, but also saddened that the color isn’t there for the rest of the comic.

Still, I think a lot of people that enjoy a more “high fantasy” style of story, would really enjoy this comic.