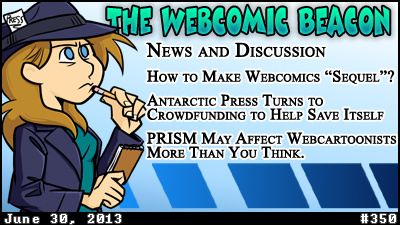 Monty Rhode, Kittyhawk, Terence MacManus, Ben Carver, and Fes Works for another week of comic news & discussion! Not a whole lot of real news for us today, but we go over Antarctic Press and their Indiegogo campaign and the How to Make Webcomics “sequel”. Plus PRISM and Animal Crossing: New Leaf. (No relation).

We actually really went on a tear about the How to Make Webcomics “sequel”, particularly in a print versus digital sale of products… discussion.

Antarctic Press Appeals to Crowdfunding to Save Itself
From a deal that went sour with Wal-Mart, Antarctic Press turns to it’s audience through an IndieGoGo campaign to save itself from the debt they incurred from mass producing it’s own comics for broader consumption through previously said deal. (Found via The Beat)

PRISM May Affect Webcartoonists More Than You Think
This doesn’t seem very Webcomics related, but I have read some of the bills that would make it “more” legal, like CISPA, ACTA, SOPA, and PIPA to name some. Most of them relate to copyright as well, and some even had language about making “distributing obscenity”, which is poorly defined in US law and could be applied to a few webcomics, a felony with five years. Discussing that a lot of the services that webcomic artists use are part of the program, like Google Docs for one, might be helpful, and I have experience in moving my server out of the USA because of such programs.
– Kittyhawk

Animal Crossing: New Leaf
The scourge of getting a webcomic done! Why is it so fun? Has Nintendo finally perfected the best timewasting game of all time? The answer: PROBABLY YES.
Best guide out there (according to Kittyhawk)

Im really not a fan of e-books. I have never bought one and hate reading large amounts of text on screens…And i dont bother with digital copies of webcomics b/c i read them free online so it seems redundant. I do buy print book versions or webcomics and support print books editions on kick starter, it makes it easier to share comics with friends and give them as gifts. Also i like to collect them. But i wouldn’t encourage indie comickers to break the bank printing up physical books. Ive done that before and it was hard enough to make back what i put into it, let alone profit XD.