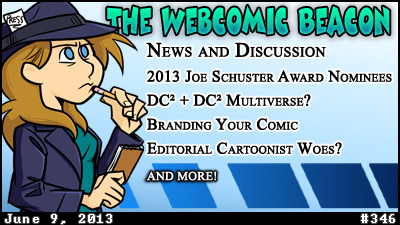 We actually had quite a debate on the show about being politically correct and freedom of speech versus bigotry; and plagiarism and self-plagiarism…. Kinda heated really, so please weigh in on the conversation with your opinions on the subject!

A coming episode of The Webcomic Beacon will be our part 2 episode of our opinions on 2nd half, and the finalé, of Strip Search.

2013 Joe Schuster Awards, Nominees Announced:
As reported by the Webcomics Overlook the nominees for the Canada-based award (webcartoonist category) have been announced:

Webcomic “Bug” is now “Bug Martini”
Popular Webcomic “Bug” (by Adam Huber) has changed names to “Bug Martini” – the reason cited being that the more generic name was creating a marketing problem (uniqueness).
This spurred a discussion on the show. Perhaps worth a discussion over the branding process for your comic, what needs to be thought of and whether simple generic names are more trouble than they’re worth? And at what point are you stuck with the name you gave yourself (if ever?)

DC² and DC² Multiverse
DC Comics tries its hand at digital comic offerings once again, but mainly as an interactive experience; plus a choose-your-own-adventure experience.
Reported on Comics Alliance, through Variety and Wired.

Sean Delonas Takes Buy Out
Editorial Cartoonist takes a buy out, and leaves the newspaper after 23 years. (Reported on The Daily Cartoonist)
Also known for re-using his previous artwork and jokes, Is a bit of a bigot, and was also the editorial cartoonist that drew President Obama as a chimp, getting shot by police, and didn’t understand why that might have been wrong… Suffice to say that some people welcome his departure.

Bill Day cartooning scandal
Old news, but on the subject of editorial cartooning… This dates back to January but the story never really broke.  Just kind of stayed in the world of editorial cartooning.
Here’s a really fascinating look over a years worth of recorded self plagiarized content; and other instances from various sources.

Interview with Steveson and Coresseto
Interesting article that touches on a wide number of topics (Comic Book Resources).

Remember Google Wallet? Eh…
We talked about how Google Wallet will allow people to “email funds” to each other, but no one really seemed to care… Square is still kicking ass a bit, with $8 Billion in transactions last year, compared to Google Wallet’s $500 Million (in the USA). Though Ben brings on some really good points to counter the negativity of this article from GiGaOM.

Comics Alliance is Back…
… Ok… (Discovered through Webcomic Overlook)