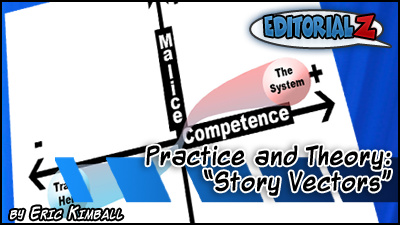 –
Let’s talk about stories for a moment here.  Specifically  Let’s talk about a certain class of story.  A story where there is a protagonist aka hero and antagonist aka villain.  Where the story is told from a single perspective of following the conflict between the hero and the villain. Although the concept of protagonist and antagonist don’t necessarily mean one person. A hero or villain can be a group of people or even the entire story worlds.  We are simply talking bout two opposing forces in these stories.

In short a hero and villain define each other and the difference between them defines the story.  Now before I get into the meat of this proposal let me define two terms as they relate to heroes and villains.

Competence
The first term is competence.  This is the measure of a characters perceived ability to achieve their goals not a measure of how talented they are.  For example a zombie horde is very competent since they want to kill people and they manage to achieve this goal even though simplest tasks such as walking tends to be quite challenging for them.  Where on the other hand the greedy scientist that created the zombie horde is very incompetent since he wanted to make money not zombies.

Another example of malice: a doctor is very knowledgeable and saves many lives.  Unfortunately, her knowledge was gained through drugging and experimenting on hobos and urchins because she feels they would be infinitely more “useful” to society this way.  In her mind, she’s helping them achieve something more.

So when i say the difference between the villain and the hero defines the story what I am talking about is the relative difference in competence and malice.    Added together you get what we will call the story vector.

Now lets look at the story vector in practice;

In a story when a villain has a high malice in comparison to the hero and the hero is only marginally more competent that the villain you get a villain who is a maniac and the hero who is a standard action hero facing him.  This is your action adventure vector where through pluck and determination the hero saves the world from a great evil.

When you decrease the relative difference in malice, or moral separation, between the villain and the hero you get a sympathetic villain vers a flawed everyman hero.  This is the bittersweet vector where the victory of the hero feels like it came at a cost.

When we have a villain that is has both low competence and high malice in relation to the hero you get the cartoon villain versus the paragon.   Here you have the standard saturday morning cartoon vector where the villain chews the scenery soliloquizing about how it good to be bad but really never gets anything done.

A villain that has low relative malice to the hero but is quite incompetent in relation to the hero you have a story of a tragic villain vs an anti hero.  This story vector often see a focus on the villain instead of the hero as the evil the villain does is often by mistake.

Now that we have examined the happy ending let’s look at the tragic modern story vectors.

When you have a vector with the malice between the hero and villain is large but the competence difference is small just barely tipping in the villain favor, it is a story of a martyr vs the corrupt.  While not a popular story today it is the saint story vector.

When the malice between the villain and the hero is low and the competence difference is only marginally skewed in the villains favor you have the story of a flaw hero in over their head vs a personal demon.  This is your noir or feet of clay story vector where a tragic flaw in the hero causes them to lose in the end.

When the malice difference is small but the hero is vastly lower in competence you have the story of a tragic hero ground down by an unrelenting system. You could call this the art house vector of stories where the hero never had a chance but the story is about their struggle.

And lastly when the relative difference in Malice and competence is tilted highly toward the villain you get the killing machine vs the victim.  This is your horror vector where the heroes are just tasty snack for the villain on it’s rampage.

With each of these vectors I said it was the relative difference between the villain and hero that defines the vector.  This is because both competence and malice only have meaning in contrast.   Since stories are about conflict the ability to achieve ones goals is always defined by how much of a resistance the opposing side put up.  Granted in some stories the “villain” is the world that just exists and it rules are keeping the hero down such as in George Orwell’s 1984.

Malice is also a relative term since the morality of a story is defined by the difference between hero and villain.  John Mcclane in Die Hard kills a lot of people but he does it for survival where Hans, his opponent, plans to kill more people and for selfish reasons.  So we see John Mcclane’s  actions a virtuous.  But if rainbow brite employed the same guns blazing approach against her nemesis Murky Dismal whose master plan is to make people somewhat sad… theeennnn we would not see rainbow brite in as quite a positive light as we do John Mclain.

Granted that Rainbow Brite movie would be epic but that not the point.

On it’s own story vectors can help you tighten your hero and villain to match their role in the story.  But story vector really gains its power when you add one more dimension.

Take your standard horror movie plot.  The initial vector is that of killing machine vs victim.  But as the story the hero grows and starts to understand their opponent slide up the chart in competence becoming the martyr and then finally the one good man who can defeat the villain.

Or take for example the fantasy story monomyth.  The hero starts out in the paragon roll where the dangers  in their world are relatively impotent and the difference between good and evil is clear.  Then the hero cross the threshold and starts the journey.  As this happens the competence of the villain gets greater the threats getting more serious at the same time the hero begins to slide down up the scale in malice losing the clear black and white view of the world.  On the vector chart they travel from paragon towards everyman hero.  At the point of the abyss the hero’s personal flaws take them into quadrant 3 where it looks like the villain will defeat them and their own lack of moral compass makes it hard to tell the difference between them and the villain.  Then the hero transforms regaining a new sense of right and wrong taking them to the role of the martyr.  This lead to a greater competence and finishing the story with victory of the one good man role.

In general in a plot each transition from one location on the chart to another represents a major event in your story.  This represents a redefining of the world and the characters and should be accompanied by a meaningful event.

In addition any character transition from a spot on the graph to a non-adjacent spot is an emotionally jarring event for the audience.  For example in the Hitchcock movie Psycho the perceived main character Marion Crane starts out as an every(wo)man hero on the run from the law.  But a third of the way through the film Marion is suddenly changed into the role of victim, Hitchcock using the emotionally jarring shift to heighten the tension.

The path of change is the arch of your story.  And there are three way to cause change in a story producing an arch

The second is to change the audience’s perception.  Remember competence and malice are perceived values.  If you give the audience information that makes them perceive the hero or villain in a different way you also produce a change in the story vector even though the core of the charcter are the aem.  A perfect example of this is the fight on the cliff scene in the princess bride.  You have two changes in competence between hero and villain with a simple phrase of  “I am not left handed”.  And even though the character do not fundamentally change the perception of the the peril changes dramatically.

The third way to produce a change is to and a new character to the mix.  Since perception of malice and competence are relative measure adding a new character changes the relationships and produces a new story vector.  Take batman.  When Batman faces the Joker you have a story of one good man facing a maniac.  But if you take the exact same batman and have him face a less malicious and less competent villain say a mad hatter who only wants to be loved but is a complete moron at it.  The story is a tragic story where Batman is an anti hero to the tragic villain of the mad hatter.

One thing to keep in mind is that story vectors are a function of modern storytelling.  It comes from a western judeo christian view that success or failure is based on the skills of the individual and moral virtue is the defining characteristic of a hero.  If you tried to apply a story vector to a Fellini film for example the system would break down since the perception of competence and malice are not defining parts of that story arch.

So what’s the point of all this.  How do you USE the story vector?  Well that is something I am not sure of yet.  What to do with this graphing method is the piece of the puzzle I leave up to you.  It is a useful tool to categorize stories but does it go beyond that?  I don’t know yet but I would like to hear what you think.

[…] WCBN Article of Interest: Eric Kimball returns with a new article, complete with video! Check out his article on the Theory and Practice of Story Vectors. […]

[…] WCBN Article of Interest: Eric Kimball returns with a new article, complete with video! Check out his article on the Theory and Practice of Story Vectors. […]