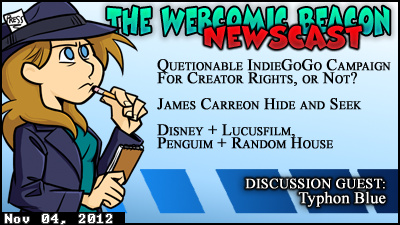 Thom Revor heads the show this week; and thanks to all of our news team: Thom Revor, Dean Esmay, Marie Tary, Jason Strawsburg, and Eric Kimball.

First Axe Cop Cartoon clip
Fox has released a clip based on the popular webcomic by brothers Malachai Nicolle (6) and Ethan Nicolle (29), Axe Cop. The clip was created as a test for the series airing next summer as part of their “ADHD (Animation Domination HD) Saturday-night block”.
Original Source: Comic Book Resources

Here is what’s known and both parties agree on:

The Point of dispute:

The things that just smell bad:

Hide and Seek: Charled Carreon Style!
It wouldn’t be a newscast if Charles Carreon didn’t do something crazy last week. Back to the topic of Lawyers behaving badly.  It seems Charles Carreon has gone from cartoonish villainy to just cartoonish.
Original Source: Pope Hat

Monkey Brain Comics donate to charity
Chris Roberson owner of Monkey Brain comics announce this week that all of the company fees taken in through the sell of its books in the month of November will be donated to the Hero Initiative a foundation that fights for comic book creators to regain and maintain their creative rights.
Original Source: Robot 6

4 breasted video game ad
For those of you who went to see “Total Recall” just for the three-breasted Martian prostitute, we have a story that goes one better.  Literally.
Original Source: The Escapist