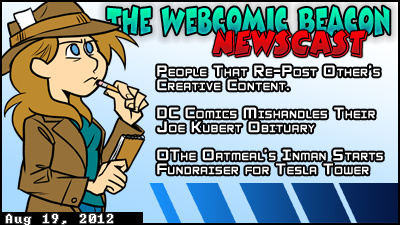 In this week’s webcomic and comic news discussion we mostly talk about what it’s worth to us when other people re-post our creative content. Thom Revor rejoins the show with Alex Heberling, Fes Works, and Marie Tary head this week’s show; with last week’s comics news brought to you by Dean Esmay, Jason Strawsburg, and Eric Kimball.

Science Fiction Master Harry Harrison Dies at 87.
Writer and creator of many different classic properties, such as “Slippery Jim” DeGriz (the Stainless Steel Rat),  Bill the Galactic Hero, and the story “Make Room, Make Room” which was adapted into the movie “Soylent Green”, passed away at the age of 87.

Kleefeld On Webcomics #72: Get Your Learnin’ On
Original Source: MTV Geek

How do draw hands and feet
Original Source: Webcomic Alliance

The cost of a logo
Original Source: Huh Magazine

Is that the best DC can do?
As mentioned earlier, the great Joe Kubert, artist for DC Comics of the silver age Hawkman, Tor, and his co-creation, Seargent Rock, as well as the founder of the world-famous Kubert School of Art, passed away at the age of 85.  There were many heartfelt remembrances and condolences printed, posted, and spoken.

But DC has once again taken this opportunity to make a mockery of their own past.

Published on the DC Blog was the following:

“We are saddened to learn of the death of our colleague and friend Joe Kubert. An absolute legend in the industry, his legacy will not only live on with his sons, but with the many artists who have passed through the storied halls of his celebrated school. His latest work on BEFORE WATCHMEN: NITE OWL was among his best, and we are so honored to have worked side-by-side with such an unforgettable force in both comics and in life.” – DC Entertainment Executive Team

Mark Waid, currently the force behind the new webcomic host Thrill bent, had this to say about it:
Fire whoever wrote that. Please.
When I die, I pray that my DC-written obit doesn’t include a link to a Comixology FLASH sale.
seriously, please get DC’s Kubert obit fixed immediately. It’s vulgar and classless. Joe deserved better.

DC eventually amend it later on, with a “personal” response from DC publishers Dan DiDio and Jim Lee.