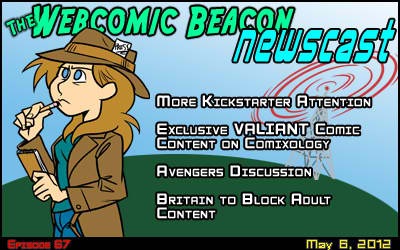 Sorry for the website issues! The Dreamhost server The Rampage Network is on, and therefore The Webcast Beacon Network, decided to…. “be upgraded” for a few days. So anyway, last week’s news is brought to you by Thomas Revor, Alex Heberling, and Jason Strawsburg!

Is Kickstarter becoming the next step beyond pre-ordering comics?
Original Source: Robot 6

Infographic: Features your next smartphone may have
Original Source: GiGaOM

I have to disagree with your insistence that purchasing an e-book is the same as purchasing a paper book. E-books are licensed to us. We do not own them.

When I buy a book (or non drm open format e-book) I can scan it and save it to any format I want. If I’m careful I can keep either the content or the physical object with me the rest of my life. I can backup, sell, lend or pass on as I choose.

If I own the e-book then I should be able to change it to any file format I want without fear of legal repercussion, or loss of privileges with vendors or publishers.

These restrictions on e-books also limit their lifespan. In the past books have been the conduit through which people have passed their knowledge, history and culture from one generation to the next. I don’t know if my e-books will last into the next decade. Will the files be compatible with future devices? Some drm needs verification from company owned servers to work. What if the company goes under?

Its like selling me books and forcing me to read them only when lit by properly licensed light bulbs. If the bulb company goes under or stops making the bulbs I need to read older books then I’m out of luck. It’s needless and limits the usefulness of the book.

Many publishers have disabled the accessibility features, forcing blind and visually impaired to break the law in order to use what they’ve paid for.

Sorry but you’ve been ranting about this a lot and its getting on my nerves. If I own it then I should be able to use it in my own way without unnecessary restrictions. Some foreword thinking publishers are making e-books more open and accessible but the two will never be equal until this is the rule and not the exception.