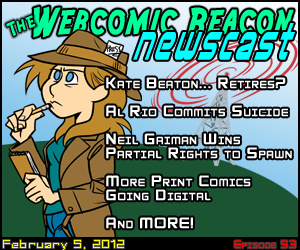 Thom Revor and Alex Heberling with News Researcher Eric Kimball bring you this week’s edition of The Webcomic Beacon Newscast! Read all the news of the past week below. Some news not discussed in part, or at all, on the show.

Also, via Fleen:
“Rich Burlew has now exceed the previous highest-funded comics project on Kickstarter by nearly 150%, and is rapidly closing in on a quarter of a million friggin’ dollars after less than ten days. I’m putting the over/under at US$325,000, and the supporter tally at an even 5000 pledges. Of course, if the pledges get a second wind, we’ll see numbers that may take years to be equalled.”

The OOFT Kickstarter is now approaching half a million dollars.  This has entered wholly hell territory.  More on this at the Order of the Stick home page:

Kate Beaton… Retires? No, not really.
Kate Beaton’s success opens up many opportunities for her. Hark! to take a back seat.
Found via: The Webcomic Overlook – Original Source: Kate Beaton

Terry Moore on why he’s going digital
Print comics’ Terry Moore explains his reasoning for publishing his works digitally after an encounter at the local comic shop.
Original Source: Robot 6

On The Kicking Of Skulls And Other Pleasantries
Excerpt: “In our first week at Keenspot we had more unique IP visits (i.e.: new readers) than all three printings of Skullkickers #1 combined.”
Found via:  CBR – Robot 6 – Original Source:  Fleen

“Now the statute of limitations — three years — begins with the discovery of the violation. … ,” Gaiman says, “You can’t secretly file copyright on someone else’s things.”

Women done well in superhero comics
Found via: Robot 6 – Original Source: This Is What Women In Superhero Comics Should Be

Entertainment profits have risen with the Internet
Original Source: GiGaOM

The only thing that annoys me about the Katie Beaton article is that she never herself said she was going to “retire”. On her actual website she just explains that she is seeking out other opportunities and may not update Hark for a while. Its basically a hiatus with out a set date.
I think the media is just over exaggerating it.

Certainly there is conjecture on part of the journalists and commentators. I have edited the link title in this news post to better describe the situation.