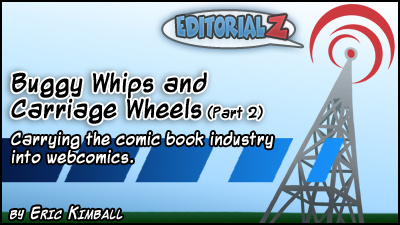 Did you read Part 1?

What was my plan? Well in the simplest interpretation I was going to propose that webcomic form the test market for ideas that could be bought and moved up the supply chain from comic books to tv, movie and videogames. And while I still believe this will happen in some cases, over all, there is a flaw in this idea. It comes don’t to the basic difference between the way that comic books and webcomic find success.

Lets start with comic books. What are the most popular comic books? The quick answer to that is the books that feature the most well know, iconic and popular character. Batman, Spiderman, etc.

On the other side of things what are the most popular webcomics? The quick answer here is the ones made by the most well known, iconic and popular CREATORS. Kate Beaton, Jeff Jacques, etc.

Branded give instant name recognition and gets potential viewers over the initial hump of trying to figure out what is this thing you are trying to sell them. Both branded creators and branded character give you this benefit, but a creator has a limited set of skills and time. Focusing on the creator limits the possible implementation of the brand as well as the expense of paying the creator every time you use their brand. A brand based around an iconic character on the other hand is genera independent, free to use.

For the foreseeable future the big media companies will not be interested in web properties because of the way that web properties rise to success. Cults of personality are too unpredictable and too expensive compared to the more reliable cult of the character meme.

So instead of giving you a brilliant strategy as to the way forward let me do a little prognosticating about what will happen in the coming year.

1) The App Market vs Comic Shop war will continue.
The back and forth battle between the comic shops and the major publishers will continue go back and forth with the publishers trying to push their catalog into the app market place with the comic shops trying to hold on to their exclusive rights to the content. The web will be largely abandoned by both parties as “unprofitable”.

2) Diamond will die
We all see this one coming. Diamond Comic Distribution is a relic from a bygone era with no real reason to exist with modern methods of communication and transporting. With the publishers looking to online distribution and comic shop diversifying into games and memorabilia Diamond is seeing is market shrink on both ends. Diamond will crash in burn in the next year(s) unless a miracle happens (Reference: Bleeding Cool)

3) Comic Book Publishers diversify distribution
With the death of Diamond the publishers will be forced to create new methods of distribution. While they are reinventing the wheel they are going to look at getting into a broader marketplace. If you are making your own distribution channel why not look a places like supermarkets and various box stores and GASP the tablet/smartphone app markeplace. At this point he system will be broken so there will really nothing the comic shops can do to stop the publisher from going digital. They will, however, not push onto the web for the reasons I stated above.

4) The Web becomes a talent pool
While for the most part publishers are going to be reluctant to pick up web properties due to the cult of personality problem. But they will start to look at individuals who have built a cult of personality around them selves as a work for hire pool on various existing products. This is already happening but once Diamond is gone and the publishers are trying to spread into a more divesre marketplace the value of bringing someone who has a following on as work for hire on an existing property will become a new way to boost sales and open doors for their product. In general these will be short term gigs with the publishers just trying to syphon off some of the webcomicer’s audience. But money is money.

5) Comic Book Shops discover the Web.
With the major publisher pushing out into new markets and the main distribution channel dead comic book shops will look for new things that will make them “special”. Diamond was the gatekeeper for comic books shops. If it was not through Diamond a shop would not talk to you. But with the death of Diamond and the publishers abandoning them the shops will be force to look for new content. They will find that these webcomic that seemed like a threat actually are in desperate need to sell their products and better yet many of them have creators that are local to the shops. Creators who are willing to show up for special appearance. Monthly meet-up in various shops will become the norm. The comic shop was born out of the underground comic movement and in the end it will return to the digital equivalent. (Reference: Sacramento Press)

6) Comic Book Publishers wage war on Webcomics
With webcomics moving into comic book shops and the death of Diamond as a gatekeeper the major publishers will attempt to shore up the new market places they have created. The will make deals with app publisher like Graphical.ly and try to use their new distribution chain to keep webcomics out. The web will be left to the webcomic but the publishers will do their best to lock webcomic out of any other venue. This is a logical extension of the ubiquity principal that states that inferior content can still win if it has wider distribution. That will be the goal of the publisher to make sure webcomics stay on the web. (Reference: GiGaOM)

7) Rise of the webcomic company
When hosting was expensive and there was no online tools like paypal or wordpress most webcomics went thought comic collective like drunkduck and keenspot. As hosting a comic became easier the companies started to decline. But once the publishers start actively lock webcomics out of other distribution methods, as other venues, and as the world at large gets to know and respect webcomics opening doors to movie, game and TV deals the usefulness of a webcomic company will rise again. These companies will act as agents asking the creator to give up a percentage of future profits for the companies work in opening doors.

8) The world ends
So the sigunlarity comes or the end of the mayan calendar or something and we don’t have to worry about this anymore. I figure I will take the Harold Camping strategy of prediction in that if you predict the end of the world often enough eventually you will be right.

So who will be the winners in the next year?

Well strangely I think this is Archie Comics game to loose. They have connections to supermarkets and box stores. They have content that is not the standard 13 year old boy power fantasy. With the addition of an openly gay character they are moving in to the family friendly liberal market one that is untaped and very tech savy. If anyone would be into buying comic apps it is the type of people who would buy a Keven Keller (the gay character) comic. (References: Gawker and ThinkProgress)

If Archie comic broaden it’s catalog the way it has been saying it will and picks up some of the more interesting comic ideas out there they could dominate the comic market in the coming year. (Reference: New York Times)

Archie will win if they can get there act together internally. The window of opportunity for Archie Comics will be very narrow, starting in the chaos caused by the death of Diamond. If the CEOs of the company are two preoccupied with trying to force each other out as they have been doing over the last year then this moment will pass allowing the other publishers to reorganize and then dominate with excess capital that their larger parent companies bring to the table. (Reference: Comics Worth Reading)

In the webcomic realm the winner will be the first company that negotiates a major tv or movie deal for a webcomic NOT CREATED BY THE CEO OF THE COMPANY. I really have to call the webcomic companies out on this one. The CEOs of every webcomic publishing/collective company I can think of has had their heads firmly up their asses for the last two years. The all have been working hard to make deals for themselves using the power of the collective for short term gain. This weakens the collective and makes the popular comic avoid the company like the plague. Not to mention the work by these CEOs is usually crap and makes webcomics as a whole look like crap.

There is a real prize here for the CEO that can learn the lesson of generosity. Make someone on other than yourself rich and the other webcomics will start flocking to your company. You’ll get better content to sell that will allow you to make better deals attracting better content. As an agent you get 10% of each deal so if you make 10 deals for other people you’ll still get to quit your day job. All you have to do is treat your company like a company instead of some BLOODY SHIRE TO YOUR OWN EGO!

I don’t know perhaps one of the owners will be visited by 3 Christmas ghosts or something. But the thing holding webcomics back right now is the myopia and unbound egos of people publishing webcomics.

And that’s my predictions for the upcoming year. It will be messy but if the right people make the right choices the webcomic and comic spheres will expand far beyond their current bounds.