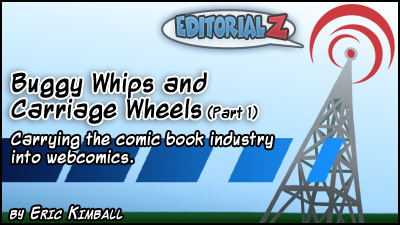 Let’s consider for a moment buggy whip and carriage wheel manufacturers. These are the two poster industries for what happens when there is a revolution brought on by technology. (Reference: New York Times)

Buggy whips… Didn’t do so well. There was nothing in an automobile that required the production of long flexible lashes and the S&M industry was still in the fledgling stage at the time. Westfield, Massachusetts (Whip City) use to have hundreds of whip manufactures now only has one. Simple put it was not the product that was the problem with Buggy whips but the fact that the methods and practices of the companies them self that became obsolete.

What does this have to do with webcomics? Well, we are looking at another fundamental shift in the world of publish. Week after week we (aka me in my job of collecting webcomic news) see articles about the decline of publishers in the face of digital distribution. So the question is are the publisher carriage wheel or buggy whip manufacturers. Can they transition into the new era or are they doom to fade from the scene. (Reference: Charlie’s Diary)

Now it’s our first instinct to just say “Well the comic companies are a bunch of pompous jerk who deserve to be forced out of business. And this has nothing to do with the fact that they reject my comic about a wisecracking cat named Trueman.” And honestly I can’t argue that the likes of Dan Dido or Gareb Shamus are going to be up for any humanitarian of the year awards. (Reference: Comics Beat – Fleen)

So good right? The selfish, pompous, jerk of the old guard are going to be force out for the fresh new companies like…

Ok, so I am not being exactly fair to Keen or Penny Arcade but the point is that we are not getting rid of the elitists pompous jerks. We are just trading one set for another. (Reference: GiaGOM)

Worse the new set is not interested in YOUR comic only in promoting their own comic. The old companies may have rejected your ground breaking Trueman the Cat comic with his love of baked ziti but at least you could submit your work in the first place. There was always a chance they would use their selfish dickishness in your favor to sell your work and rocket you to fame. The new webcomic companies are all about in house products only not about finding new talent and new ideas.

So what, right? It’s the Internet. We don’t need big companies anymore. We can do it all our selves. Who needs a company to steal your ip for 130 bucks! Down with company and power to the people! (Reference: Comics Alliance)

And you would be absolutely right in saying that IF you were trying to hook up with that cute protester you met while occupying Wall Street. (Reference: ABC News)

It’s not so much a good idea out here in the real world where we got to eat. The simple fact is that most webcomic don’t make money. Or more accurately we don’t make real money. We make just enough to support one individual living in a cheap part of the country. (Reference: Cat and Girl – reMIND)

Forget it if you want the webcomic to be your only job or you want to support a family or something. More importantly that that (because kids eat too much anyway) is that you can’t make enough with a webcomic to pay support staff. You can’t have an artist, writer, inker, editor, marketing department and so on. We in webcomics tend to keep quite about this fact because we fear it will give ammunition to our critics but honestly our critics have a point. We have not broken the formula for real profits. (Reference: The Cagle Post – Living With Inanity)

(Discalimer: Yes there are a few that do make enough to feed their family. But they are a very few at the very top tier of webcomic. And frankly the top tier should be doing better than just getting by. The entire webcomic industry is economically depressed if you compare it to the level of achievement of the old publishing companies)

What can a company offer us? Well a good company that knows what it’s doing would take your IP and turn around toy make books and movies and other ancillary things out of the IP that you could not have made on your own. They would assign a team to work on your IP so that the final product is of higher quality and has more mass appeal. They make your project better, get it into more markets, make he big deals and you get paid a living wage.

The mantra of webcomics has been do it all yourself but to slightly miss-quote Howard Tayler “One challenge that a lot of creators face is what we called the “not invented here” mindset in the software industry. Once you decide to do it all yourself you often decide to do everything yourself. That way lies madness.” (Reference: NEWSarama)

We need companies. Doing it all yourself mean you’re a jack of all trades and master of none. Your projects never really take off because you lack the expertise to fully realize them. We need to start trading partial ownership of our IP for access to higher levels of achievement. The publishing companies aren’t the only ones facing extinction due to the fact that they are clinging to an outdated business model. Webcomics are sitting next to them on the chopping block if we keep on insisting on doing everything including the things we are bad at ourselves.

Let’s start with the comic strip industry with syndicates and newspaper consortiums. For the moment lets overlook that the have names worthy of evil organizations in Bond films and focus on how they work.

With the Internet, access models of business break down, because everyone can reach everyone else. No one has a lock on a market anymore. An individual cartoonist can gain access to the exact same readers that a newspaper can and sell his own products instead of selling the newspapers products. The comic is a loss leader still but 2 middle men have been remove and thus the cartoonist has a higher profit potential. For comic strips nothing but buggy whips companies here. The syndicates and newspapers just don’t offer the cartoonist anything more that what he can do himself.

Well, the comic strip industry was a bust, but now let’s look at the comic book industry. With comic books we have a split model here. The comic book shops aka direct market are also all about access. The shops provide access to comic book fans. Going one step up the chain Diamond Comic Distribution is what is says on the tin. It is a company who’s business models is centered around getting comic to the direct market. This is almost a direct parallel of the newspaper model Diamond acting as a syndicate providing access to the comic shops and the comic shops providing access to the local market selling comic and ancillary items associated with the comic. They don’t offer a creator anything more than access that the net can provide better and more efficiently and for free. Again buggy whips. (Reference: Comics Beat)

But the comic book companies (marvel, dc, Image etc) have a different model. It is not about access but about building up Intellectual Property for eventual resale in multiple markets. The direct market is not the core of the comic book industry anymore (although there are some very high up in comic book companies that fail to realize this) but simply a way to build and test an ip. If it is successful then the ip is moved to movies, book, merchandise and so on where the real money is made. Why is the walking dead a sucess? Because theirs a bloody TV show about it. Why is there a bloody TV show about the walking dead? Because the comic did moderately well in the market place and that got the TV exec interested in it. The comic sucess of Walking dead didn’t make it a cultural icon and it didn’t make the creator a ton of money it was the TV show that was the claim to fame and riches for the creator. (Reference: Gabe Bridwell)

Join on to a Marvel or DC type company and you get editors, artists, as you move up the in popularity you get support from movie, tv and toy producers. So comic book companies have the process and structures that are desperately needed by webcomic creators to increase the profitability and quality of their products. Here we have a carriage wheel company. The early automobile could have never succeeded if someone was not producing cheap readily available part for it. Like wise webcomics can not succeed with out the ability to broaden the appeal and professionalism of their ip. True the companies may try to bastardize your watchmen epic but you will make a living wage and increase the quality of work in general and the projects you can undertake: Saturday Morning Watchmen. Ok that was a joke but this one is real: The Ethics of Watchmen 2 (Bleeding Cool).

There is just one problem. The direct market. Back in the day the carriage wheel industry had nothing to do with buggy whip and vise versa out side of their products being used in the same final object. So when carriage wheel makers decided to jump ship there was very little the buggy whip makers could say about it. But the comic book publishers are tied to the direct market. The publishers have no other outlet for their books at this point. The transition to a digital system takes time and the comic book shops are not going to allow the publisher that time for a smooth transition. The direct market has seen what happened to the record stores and they are ready to punish any company that looks to be abandoning them. (Reference: Phoenix NewTimes – Bleeding Cool)

The direct market is forcing the publisher to sell the digital books at an insane price of 3.99 to match the comic book shop. Failure to tow this line means boycott and a complete collapse of your sale channel. But keeping the price this high is criplling the growth of the digital sphere (Reference: Comics Beat).

So what is the solution? Well there is a way do to do an end-run around the direct market. A way to transition to a digital only distribution model without incurring the wrath of he comic book shops. It is the webcomic model and I will talk about how that works next time.