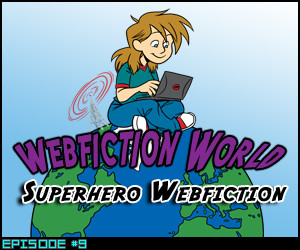 People the world over are familiar with superhero comics, but what about in webfiction? Jim Zoetewey (In My Daydreams) joins A. M. Harte to talk to you about superhero webfiction. Producer Fes Works joins in during the second segment for discussion and perspective.

Readings:
The Legion of Nothing: In the Public Eye by Jim Zoetewey, read by Kara Dennison

In an ideal world, would have also thought to mention:

Flyover City: A story of an unpowered man (who never gets powers) in a world of superheroes.
http://flyovercity.blogspot.com/

Wonder City stories: A very character focused look at people with powers, some of whom are superheroes, most of whom aren’t. It’s less a novel than a series of interconnected short stories.
http://wonder-city.dreamwidth.org/

DOH. I had meant to ask you to recommend other webfics, but I think we got sidetracked by superman.

Hey, Jim, thanks for the shoutout to Wonder City Stories! Great interview, A.M. and Fes.

Listening to the interview with Jim Zoetewey. Thanks for covering his site. I have been a fan since I found it a few years ago – and hope to work with him soon.

I’m glad there is a platform to help get the word out on web fiction and even spotlighting the superhero web fiction. I always think the challenge is that since we don’t have as many pictures, then we do not get the audience of mainstream comics.

Thanks for the comment Lorenzo! Glad you enjoyed the show 🙂 My biggest worry was pronouncing Jim’s surname correctly, haha…

How long has MCM been gone now?

@Hyperwarp85 Well, this is episode 09. He was still alive when we recorded episode 07… Can you believe he FORGOT we were recording? Idiot boy. Don’t worry, I’ll smack him hard and hopefully get him back on the wagon for the next time!

Admittedly, in some cases, latter is a subgenre of the former.

Hell yes!
Post-apocalyptic and Zombie fiction is awesome!
Maybe MCM will come back as a zombie in that episode?

Interesting to see that other people are working with similar ideas to my own. Fun podcast!

Post-apocalyptic fiction (and zombies) — so noted. 🙂