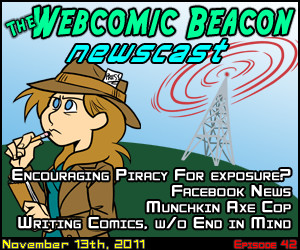 Dante (Surviving the World) joins Rosscott and Alex Heberling for this edition of The Newscast. Thanks to Eric Kimball for gathering our news links.

Even TGT Media mentions the giveaway!

Making Piracy easier as a marketing strategy
Jim Zubkavich is going out of his way to get people to pirate his work providing PDF and torrent files.  All under the theory that the more people who read the comic the better.
Original Sources: Robot 6 and Graphic Policy

Crowdfunding bill increased what can be invested
Original Source: All Things D

On writing webcomics without an end in mind
Found via: Comics Reporter – Original Source: Rina Poccolo

Why we get the future wrong (skipped?)
Long lecture on the flaws of predicting technological trends focused on Music Encyclopedia and Newspaper industries and how they missed the trends that were going to change their bussiness.
Original Source: Boing Boing

Occupy Oakland Cartoon Journalism
Found via: The Mary Sue – Original Source: This is What Concerns Me

Duck does not like to be touched
Original Source: BoingBoing