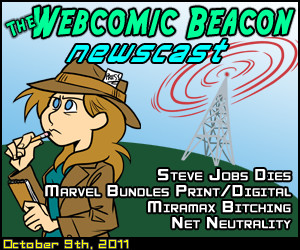 Gordon McAlpin (Multiplex) is this week’s guest host, joining Rosscott and Alex Heberling! Thanks to Eric Kimball for gathering our news links.

Sexual Assault Controversy in Evil Diva
Normally we do not include stories about the melodrama surrounding and individual comic but this one was a little interesting.  The webcomic Evil Diva went to a pay as you go funding system a little while back.  With this change in funding models the storytelling has shifted as well to be more like a soap opera with cliffhangers on the end of every page.  Lately one of these cliffhanger themes has been leading up to a sexual assault:

Starting here, ultimately getting to this. (Trigger Warning)

On the final page in that series the readers of the comic exploded in rage over then introduction of sexual assault in a comic that up until that point had been a light hearted and whimsical story for no better reason than to encourage donations.  See the comment thread on the last page.  The creators of the comic were unapologetic in response to the fan outrage.

While I deeply regret any discomfort any of you have with what could be described as the ‘…a very special’ tone of this issue, I do feel compelled to point out that [according to statistics] One quarter of the women in my wife’s college sorority were victims of rape or attempted rape.
… [Evil Diva is] about a young girl trying to find her power in a world which continually tries to take it from her, an ongoing challenge for women even in so-called ‘modern enlightened society.’ Occasionally we feel obligated to address that issue directly. If that’s too much fiber for your diet, there’s plenty of cotton candy and twinkies to be had elsewhere on the web.

Did the creators of Evil Diva made a huge mistake right? How do you feel about cartoonists inciting their audience? Has ANY webcomic ever done a “decent” rape story, where its not merely a plot device? To be fair, we only see an assault, as of the time of this writing, and we don’t know how far they will take the scene. But it is still a discussion worth having.

Miramax CEO sites Digital Monopoly as the biggest threat to the industry
Piracy isn’t a big deal to them nearly as much as Wal-Mart was/is to prices. Meanwhile for digital distribution:

Another problem, related to the pricing issue, is the emergence of digital monopolies such as the one Apple has in the digital music business. This threatens the music industry more than piracy, Miramax’s CEO suggested.

Anyone remember the old Kool-Aid Man comics? Quick Bunny? What about the Hostess Fruit Pies comic ads? Anyone? Anyone? Bueller? Bueller?

Marvel Starts Bundling Digital and Print Comics
Marvel have announced they will publish Avenging Spider-Man #1 by Zeb Wells and Joe Madureira polybagged with a free digital download code for all customers who buy the print version. The digital download will be available through the Marvel App and the Google Chrome Store in November, when the print comic ships.
Original Source: Bleeding Cool

Sexual Assault Controversy in Evil Diva.
If the proper amount of research isn’t done on any subject, especially rape written from a male perspective as relates to a woman, it shouldn’t be used as subject matter.

If a comic is noted as being lighthearted, to change it to a serious plot line without enough of a lead in, does not seem a wise course of action. Plus, readers come to associate and expect consistency and to make such a drastic change, would certainly make me stop reading it. This is even more the case when something of a serious nature is written w/o a a strong evident background of fact-finding.