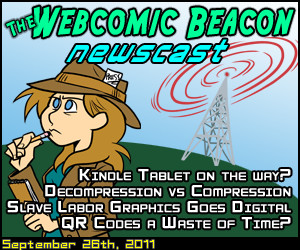 Dern (Hello, With Cheese) returned to grace the Webcomic Beacon Newscast once again, with Rosscott and Alex Heberling! Thanks to Eric Kimball for gathering our news links.

Assetbar closing it doors
Assetbar, a premium content thing created by/for Chris Onstadt/Achewood to give his readers extra content, is closing its doors. Seems like it aspired to be the Topatoco of premium/subscription content, but never took off.
Found via: Fleen – Assetbar

Kindle Tablet to be unveiled
Original Source: This is My Next – Found via: Mobile Beat

Why QR codes are a waste of time
Original Source: GiGaOM

Co-Founder of DragonCon Arrested on Child molestation charges.
Note: He’s had nothing to do with DragonCon, nor has attended, for over 10 years.
Original Source: Robot 6

I really don’t care for QR Codes, especially when they give something special or a bonus. The reason being that I don’t have, and won’t be able to afford a Smart Phone anytime soon. So I feel like I’m being left out of these extra bonuses just because I don’t have a smart phone.

I always wondered what those weird squares are, and b/c of this episode now i know. I have a smart phone (courtesy my company) and so do many of my friends, i have never seen any of them scan the QR codes so i just assume they aren’t really worthwile.

[…] “sdshamshel” (aka Carl) from Ogiue Maniax joins Fes Works and Mark Savary in this week’s discussion. A large amount of this show comes from Carl’s post “Explaining Decompression in Comics” from his website, which we had reported on The Webcomic Beacon Newscast back in September. […]