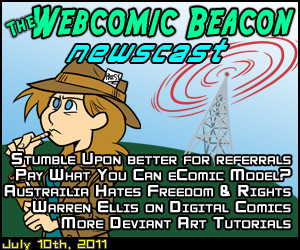 Ben Carver (Animation Aficionados) and Hal Hefner (Gates) join us as guests for this week’s Webcomic Beacon Newscast! Thanks to Eric Kimball, our newshound for collecting articles, for hosting this week. Alex and Rosscott are out. Not all articles may have been gone over in detail, but they are all listed for you.

GG: Do you think it’s easier for women to break into the digital industry than in traditional comic strips and comic books?

DC: Yes, although I think it has more to do with the genre than the medium. Most comic books are aimed at boys, are serious, and have a focus on superpowers. Most popular webcomics are character-driven and have to do with the characters’ lifestyles, or observations about science or philosophy, and almost all of them could be clumped into the broad category of “humor.” While I know plenty of women who genuinely love to read about superheroes, I think that, generally, most women prefer to read (and write) about how characters interact with one another, and not how they’re gonna pulverize each other.

End of the United Media Syndicate

“For me, the Universal/United deal had to do with the fact that, over the years, there was this slow bleed of good people leaving the company,” Peirce says. “The ones that remained weren’t given the support or resources to maintain what had been built while changing with the times…

“Online, it takes an intense, interested audience to survive and prosper,” Fry tells Comic Riffs. “Most newspaper comics just won’t cut it. But a few will. And great online comics like ‘the Oatmeal’ ‘xkcd’ and ‘Penny Arcade’ will lead us into the future.”

This time, StumbleUpon’s turnaround is gaining traction at exactly the same time that Facebook’s new user numbers are reportedly slowing down, and Twitter seems to be dealing with stickiness problems. Clearly, something about StumbleUpon’s strategy is working very well. It remains to be seen how long StumbleUpon can retain the top spot — its competitors in the social media space aren’t known for going down without a fight.

Pay What You Can “E-Comic”

So this is a bit of an odd one.  The webcomic Bob the squirrel is offering an ebook to “purchase” the trick is that the purchase price is whatever you choose.  The odd thing about this is that this ebook is for sale on a free webcomic site that has a donation button.  So you could read the  free comic and then donate what you like normally but not you have an option to also read a free comic for donating what you like. Is this an exercise in redundancy or a brilliant bit of social engineering?

Original Source: Bob The Squirrel – via The Daily Cartoonist

Australia Has Begun Censoring the Internet

Customers who visit one of the sites on Interpol’s list will be greeted by an Interpol ‘stop page’ which will explain that the content they have attempted to access is illegal, along with instructions as to how they can challenge Interpol’s ruling.

Concerns Over The Dropbox’s Change In TOS

Complex issue here.  Drop box had some language in their new TOS that looked like they were taking the right to distribute other people work.  This was in fact a legal protection for a service that transfer files from one computer to another.  Another concern is that the TOC states dropbox will turn over material to law enforcement when requested. While the changes seem reality banal the outcry over the loss of privacy has been great.  Most people view dropbox as a personal hard drive not a network service.

Kinect Knows What You Are Doing Dave
Programmers have hacked the Kinect system to be able to identify the actions you are taking.  It’s a step on the road to true AI.  It’s also bloody creepy.
Original Source: I Programmer – via Slashdot

I have to agree with Danielle Corsetto. I do think it’s easier to break into digital, though I think genre is only half of it. The DIY method works so much easier and cheaper on the digital platform, and that helps a lot, too.

Exciting tidbit about the museum showing — too bad it’s in California. I’m stuck in the midwest!