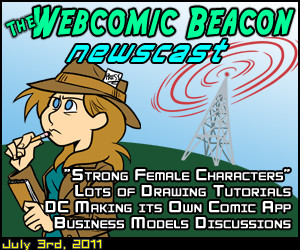 Lots of news and more tutorials this week! Adam Smithee, Rosscott and Alex Heberling are here for this episode of the Webcomic Beacon Newscast. Thanks to Eric Kimball, our newshound for collecting articles. Not all articles may have been gone over in detail, but they are all listed for you.

“How do you keep up with new venues of distribution, and what do you feel is the biggest mistake most creators — and larger companies — make when dealing with electronic distribution?

“Foglio: Actually, I really think we’re dropping the ball on this. We already should have iPad aps, but we’re too damn busy to do all the work that’s required on our end. I guess if I have an opinion about it, I’d say don’t get too cranked about the money part of it. The thing you want is people reading your work, and as a webcomic, you’re already giving it away for nothing. Don’t let people rip you off, but don’t ask for the moon.”

DC Windows Phone App (In Brief)
DC is making it’s own app now for Windows marketplace.  Is this a break with comixology?
Original Source: WPCentral – via Bleeding Cool

You Are a Brand Now (In Brief)
Original Source: GiGaOM

Preliminary Results on What People Look for in Digital Comics (In Brief)
Original Source: Fleen

Deviant Art Tutorials of the Week

How to Draw Men
Source: Krad-Eelav

@Comics212: It’s kind of amazing how little interaction the webcomics half of my twitter feed has with the “mainstream comics” half, and vice versa.

However, in all fairness, after tweeting with him, Zubkavich had followed up with:
@WebcomicBeacon If I gave the impression that I spoke for webcartoonists, I apologize. I want to see all comics succeed in this market. and
@WebcomicBeacon I did a webcomic from 2001-2003 and have plans for possible future webcomics. I have nothing against the community at all.

So, jumping to conclusions and apologies all around.

Denver Post Cuts 13 Comics and No One Cares.
According to Westword , the Post has just made such head-turning cuts as “Doonesbury” and demoted “Peanuts” to Sunday-only status. The other axed strips reportedly are: “Bizarro,” “Brevity,” “Dustin,” “F-Minus,” “Frazz,” “Heart of the City,” “The Knight Life,” “Non Sequitur,” “Overboard,” “Rhymes with Orange” and “Scary Gary.”

What naturally gives rise to the question: What the heck survived? The strips that live on to hang on another day reportedly include: “Beetle Bailey,” Blondie,” “Dennis the Menace,” “The Family Circus,” “Garfield” and “Marmaduke.” It’s worth noting: Except for “Garfield,” all those strips are at least a half-century old.

After all these were cut, NOBODY NOTICED OR CARED

Original Source: The Daily Cartoonist and The Washington Post

Rob Leified is SO Dedicated to Comics, He’s Willing Kill for Them!
… by operating a camera, while inking a comic and driving.  Say what you want about his skill as an artist he definitely is not a good driver.
Original Source: YouTube

DC Hipster Reboot
Some very awesome drawings of DC character as 20 something Coffee shop hipsters.  This is a reboot I would actually read.
Original Source: CallMePo – via Bleeding Cool

Hey Man, I was cleaning out my CONvergance 2011 pack and I saw your card that you gave me and I hope everything is going well and I also hope that my tips from ‘So you want to be a Podcaster’ Panel helps.
Have a great night,
Scott White
Host of ILP

I did get a few additional podcasting resources, in addition to some confirmations to information I already had. Thanks 🙂