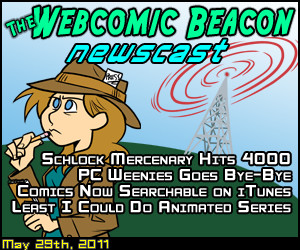 The Webcomic Beacon Newscast is taken over by Fes Works, Tanya Higgins, and Mark Savary. The regular crew, ALL of the regular Newscast crew was not available.

Least I Could Do Kickstarter to Make An Animated Pilot Episode
(Original Source Collection: Fleen and tweeting – via ComixTalk – The Kickstarter)

Law and Order Shows Appreciation for Webcomic
(via: Comics Alliance)

Cryptozoic to Bring the World of Warcraft & Starcraft Mangas to the Digital Realm
(Original Source: BlizzPlanet – via: Robot 6)

Scott Kurtz wants to do away with the term “webcomics” for himself. He’s now just a “cartoonist” not a “webcartoonist”.
(via: Webcomics Weekly #80)

The break song was We Are The FuMP by The Fump,
and is The FuMP’s 500th track on their web community.