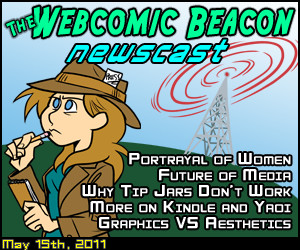 Guest host Phil Kahn (Guilded Age) and later joined with Carter Fort (The Crooked Gremlins). Rosscott runs the show with Alex Heberling today, and thanks to Eric Kimble for being our newshound.

Discussion of How to Portray Women in Comics
Original Source: Article4Wealth via When Fangirls Attack)

The Future of Media is Murky
(Original Source: Columbia Journalism School – via GiGaOM)

An App Only Strategy Can Lead to Downfall
(Original Source: GiGOM)

Icemaster Returns in Fear Itself: The Homefront #2
Returns after first appearing in a hostess fruit pie advertisement that was drawn by Frank Miller.  I know this is not webcomic related but what the hell.  You could not make this up.
(Original Source: io9 – via Bleeding Cool)