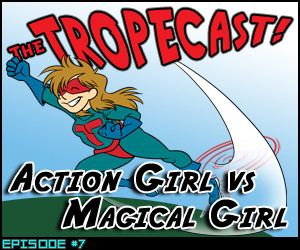 Adam Smithee, Alex Heberling, Liz Staley, and Eric Kimble (for a while) are here for Action Girl vs Magical Girl tropes! Of course, there is some crossover discussion on giant robots, and a bit about Power Rangers. There is also a huge Disney tangent that Fes came back to (since Adam recorded this show), and subsequently deleted. Who would win in a fight? Magical Girls or Action Girls?

Is there any chance to see (or rather hear) a version of the tropecast with the Disney tangent intact? Kinda like a “director’s cut” maybe?

I can give you a quick recap; it started around the 36 minute mark with how Disney shows no love for the Atlantis princess, and then devolved into how the people who run Disney’s “Direct To Video” department are the worst human beings ever.

Magical Girl(s) win.
You all ignored one important operating trope – “Power of Friendship”. Most Action Girls operate as solos, Rambos with bewbs. Magical Girls, however, trend towards being team players, supporting each other as a Rangers-style team, or having their own analogous Tuxedo Masks for backup.

And transformations and talking always count as free action. The “In the name of the moon” is rarely interrupted because it’s a staple of Japanese Theater, where two warriors would dramatically introduce themselves before some epic duel of the fates. (Okay, occasionally a trope played out in the west, IRL, through heraldry before a battle).

I hope I can still say this without sounding pretensious:

In Volume 1 of the reprinted Sailor Moon (you could get it at Walmart at the time of this posting), in Act Three: Rei, Sailor Mars the title character takes a haunted bus ride to the dark dimension ruled by the first bad guys of the series.

In order to follow her there and rescue her, Sailor Mercury (the brains) figured out a way to teleport into the dimension “using the same power we use to transform.” Now from this we can infer that the Sailor Scouts actually went inside a hammerspace-style pocket dimension, which being outside normal space, could be used to connect to other dimensions.

That rainbow effect in the background is actually supposed to be similar to the special effects seen when a space ship is going through hyperspace or a time machine is going through a black hole. Nothing was ever done with this, perhaps because the technology that made it work was thousands of years old and most of the hardware was on the moon, though more likely because the writers just forgot about it. Still, it explains why the transformations were never interrupted, because the girls were in “cut-scene-space” that was in a separate continuity.

If the action girl is going to interrupt the transformation sequence, they would have to use the same phenomena that allowed them to pass over from their version of earth into the Moonyverse. This only applies to certain versions of Sailor Moon, and I appologize if I sounded two pretensious. I just thought it was relevant information about one of the more prominent examples of magical girls for this discussion

I think Voltron also explained why the baddies didn’t attack during the transformation sequence either. It was basically there was an “impenetrable shield” that went up during that time. *handwave*