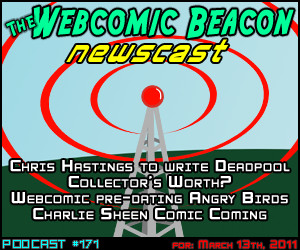 Eric Kimball, our resident newshound, joins  Mark Savary and Fes Works for this edition of the Webcomic Beacon Newscast! Christopher Hastings of Dr. McNinja has been trusted to write a Deadpool miniseries for Marvel. Web-sold, first edition Mouse Guard #1 sells high in the collector’s market. Before Angry Birds, was an attempt to make money via a webcomic. Charlie Sheen (WINNING!) to be featured in a comic book, ala the Mark Zuckerburg comic book.

Also, with Convention Season upon us, we’ll be looking for Con Reports from people, of which we hope to mention and link people’s interesting stories and experiences! Please email us links to your Con Reports!

Mouse Guard #1 Sells to Collectors for Over $500
(Source: Bleeding Cool)

ComixTalk asks you how you organize your webcomics
(Source: ComixTalk)

Charlie Sheen to be featured in Comic Book
(Source: CNN)

Girly: The Complete Collection
Pre-orders NOW! The original Book 1 and Book 2 count only as Book 1 of this 4 Book set. Pre-orders are on now, and start at $100. Includes slip case, 4 books, and over 1000 pages of “pink vision” comics! LIMITED TO A PRINT RUN of 500!

The webfiction thing sounds really cool. I’d be interested in reading aloud whenever you need people for that.