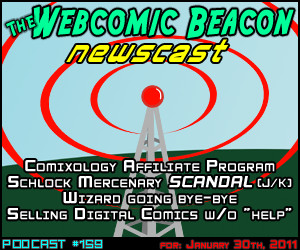 Jules Rivera joins Rosscott, Alex Heberling, and Mark Savary for this edition of the Webcomic Beacon Newscast! We also have newshound Eric (Exiern) to thank for snooping out stories, who was also on today’s show! Bigger show than expected. We discuss much about comics sales through the iPad and other mobile devices. Also some “controversy” with Schlock Mercenary, Wizard going bye-bye, and Mark Millar saying he’s not making much money with digital sales.

Mark Millar “not making much money on digital comics.”
(Source: himself)

What it takes to make a buck at selling Digital Comic
(Source: Publishers Weekly – via Robot 6)

Founder of Red 5 gives views on digital comics
(Source: Things From Another World – via Robot 6)

I just wanted to say that you guys had a great show. One of my favorite pod cast on the net right now and a great source of comic news. You’re the news damnit! Peanut butter and jelly.

Thanks! I’ve shy-ed (??) away from covering too many items of discussion that would no doubtedly be DATED after a single week. While the Newscasts likely won’t do well in the archives, I think they are a good idea. I’m glad I decided to add it to our programming 🙂