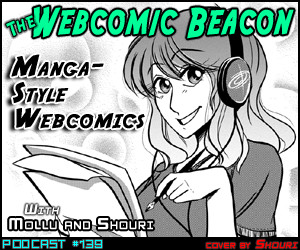 Shouri (Springette) and Molly Hayden (Northwind) join Fes, Tanya, and Mark to discuss webcomics done in a “manga” stylings. We attempt to define what “manga” is, as well as the controversial “right-to-left” versus “left-to-right”. Tanya also  struggles to maintain a connection.

Man, I really wish I was there for this one. Ahead of even listening to this (and listen to it, I shall!), Neil has to say that right-to-left paneling is total ca-ca. Maybe you and your friends enjoy it. Maybe that’s all the audience you want. That’s fine. But if you want other people to read your stuff, the correct flow is left-to-right.

You know why? Because you don’t go against the flow of your text. Never never never ever! Nobody wants to read in one direction and follow panels in the other. Don’t ask your readers to do it. There’s nothing about the “authentic manga experience” that necessitates making your comic difficult to read. If you’re doing it in English, then obey English’s number one rule.

The only excuse is it is being translated from an original market that goes right-to-left.

Hard rules about how a comic is supposed to be read is one of the downsides of putting your comic on the web (unless the reader is using an iPad or something similar). It was grand having to rotate Cerebus every which way during the Church and State arc, but you simply CAN’T do that in a webcomic.

Also, dang. First example of a western print comic i could think of wasn’t a heroes thing.

It’s a matter of the culture. In original english speaking cultures, the rules of literature are clear and universal:

It’s the sole basis for the communicable, written language. If your comic is in english, and is only available in english, THERE IS NO GOOD EXCUSE! Really, it makes you look like a poser.

I can think of several viable instances in which I would not have a problem why a comic is artistically set-up to be read right-to-left (and therefore, so would be the dialog).

The only excuse that could come CLOSE to why an english comic presented primarily or only in cultures that read LEFT-to-right, would be instead right-to-LEFT, would be if they are hoping to be picked up by a Manga publisher or something…. How often does that happen? Hell, Manga publishers have MIRRORED manga in order to print left-to-right here.

Anyway, I’m more than willing to re-approach this subject with people that can explain this to me.

We need to have a show on Word Balloons now that I think of it….

One thing that dictates the art for manga, is that the action is slowed down and the stories are traditionally emotionally based. This is unlike American comics whereas the story is action based. What would take 1 page in our comics may take 4 pages in a manga. Characters are more expressive, more time is given to patterns and textures, more feelings are explored using line – positive and negative spaces. Between the drawn action lines, intertwined humor and splash pages, we end up with 300 pages whereas DC and Marvel do it 22.

Some of the new work that is borrowing the manga style, experiments with combining eastern and western art / stories. Even some of the new Japanese manga is moving toward that to continue feeding the needs of a growing audience. All good, but it blurs what made manga so interesting to us. Compare work done 20 years ago and you will get the benefit of why it took 300 – 1000 pages to tell a short and simple story. As ever, we in the west are in a hurry, so we want our eye candy and thrill without the long term relationship. Perhaps that is why there is such a large manga contingent – they want to slow down and enjoy the style: big eyes, gravity defying hair and emotionally based drawings allowing the characters to grow, shrink and even become caricatures of themselves.

Variety is the spice of life.

Some of us have comics where events over 2 weeks have taken over 400 comics and 4 years to tell. 😛

Not always the case, of course.

There is also a reason I chose to call this episodes “Manga-Style” versus “Web-Manga”. Though, i think, the information from this episode was all very good, but as I have been emailed, there is much more to discuss as well.

to answer your question of what those large cheap manga anthologies, we just call them ‘phonebook’ size magazines.