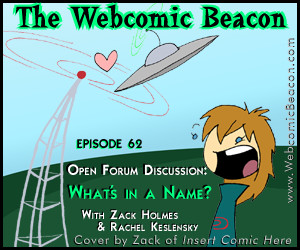 Zack (Insert Comic Here) and Rachel (Last Res0rt) join Fes, Tanya, and Mark to discuss some of the meanings behind, and reasons for, the names we pick for our webcomic characters. We are ALSO joined by several callers that were listening to the show LIVE on our Sunday Afternoon Broadcast! What were YOU doing? Watching the “Super Bowl”?

The people who called in were: Adrian from Jayden and Crusader, Ben Carver from Point Guardian, Jules Rivera from March Rocket, Alexantra from Garanos, and  Gray Liliy from The Adventures of Wiglaf and Mordred

Thanks to George for recording the sites mentioned on the show:
Webcomic Overlook, Least I could do, Gastrophobia, Questionable Content, Krazy Bov Comics

[…] Tanya and Mark  over at ‘The Webcomics Beacon‘ have reviewed my work in their latest podcast.  Now I must admit, I was extremely nervous waiting to hear what someone else had thought of my […]

Hey guys! Thanks for spotlighting Synchronism! I’m glad you seem to like it 🙂

Mark had my art style nailed – I use primarily brush and ink on bristol. The panel borders are sharpie and the lettering is Micron. I’m switching back to using Microns for some of my detail work, though. (Also, the first 3 pages are all in Micron)

Also, I’m working on the navigation to make this more obvious, but be sure to click on the pages for comics 1, 2, 5, 6, and 9 (they’re interactive).

And a few notes on my own character’s names…
Karma was named keeping her mother in mind. As her mom is going to be a fairly significant character in the comic, I named the daughter something that the mother would probably have chosen at the time.

Though my favorite character name origin ever is Travis, whose name I got from the high scores display on an arcade game 🙂

Also, Fes, you said Twisted Musings made you “drunk on puns”? I guess you could say it made you… “pun-ch drunk”? 😀

It was actually a Searchlight 😛

Maybe I should change or modify the names o_O

I forgot about the strips that have extra strips behind them! Interesting.

Oh, and your pun? Nope, I think you need to be kicked in the balls now 😛

Dammit. I called it a spotlight in my original email too. Ah well. Sorry about that!

Not sorry about the pun, though 🙂

Hey guys! Thanks for the searchlight on Mikey’s Life! I really enjoyed all the positive comments! It means the world to me! I was especially surprised that Mark liked it–that meant so much to me! Thanks, Mark! BTW, I do draw everything using microns on bristol and sometimes a brush pen or a #6 brush for some of the bolder lines and outdoor scenes. Again, I can’t thank you guys enough for the kind words! I’d love to do a Slice of Life podcast, just let me know when! 🙂

you said the thing about mini webcomic awards, i have comic to submit! it’s not mine but i wanna nominate it if i can here! http://dooomcat.com/wp/

[…] tagging system, recieved several awesome reviews and an excellent interview (as well as a couple of guest appearances on the Webcomic Beacon!), and raised plenty of funds through the Star Org Cameo Drive, all of which […]

Me and my girlfriend come to your site often. We love reading your posts. Thank you!