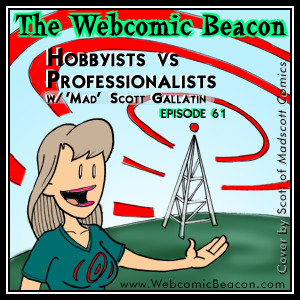 Scott Gallatin (of The Gigcast and Madscott) join Fes, Tanya, and Mark as we talk about hobbyist and professionalist approaches to webcomickery… Yes I know that isn’t a real word, but it looks funny.

This episode is brought to you by: Galaxion and Webcomic Asylum!

Thanks to George for recording the sites mentioned on the show:
Dominic Deegan, Least I could do (NSFW), Jonathan Coulton, Scott Kurtz’s PVP, Penny Arcade, No need for Bushido

Oh, man… I was just thinking about this topic the other day. Guess I’m gonna have to listen to this podcast. 🙂

I think we covered the topic fairly… though mostly from a hobbyist/amatuer perspective. I would actually like to revisit this topic with a couple of guests that are in the “professional range” for some more perspective.

I would actually love to get Scott Kurtz (mostly because I agree with much of what he talks about on Webcomics Weekly) or even some of the other Webcomics Weekly crew on our show to discuss this… or at the very least, encourage THEM to do a show on this very topic.

Even if they do, I’d still be down for a “part 2” of this topic, more from the “professional angle”.

Just wanted to pass on some apreciation, really enjoyed the show and the topic.

I’d probably try to get Brad Guigar, Fes. He seems to be the most approachable (or most likely to grant an interview).

@ Sohmer – Thanks very much! While we tend to be fairly amatuerish and such, we still honestly try to produce shows with decent topics and discussion now and again 😉

@ El Santo – Certainly something to consider. I’m still very open as to who or whom we could get on a “part 2”. In any case, I still would like to, and would not mind, Webcomics Weekly to steal this topic for one of their shows. (I’ll ask first before I directly suggest it to them 😉 ).

Very good topic, gang. Plus, Scott is good peeps. I have some strong opinions on the hobbyists and their affect on the “careerists.” Nothing against them but the webcomics world is a cloudy pond to swim in if you’re trying to make a living.

True. There is a lot of “crap” out there… while I may hate it, if those crap comics make money, they have every right to. Though I would say there are plenty of “more deserving” websites out there. Even if my projects started making huge bank, I’d still admit that there were better sites that deserve it more.

In any case, this is also why I believe that people should be PROMOTING more webcomics, instead of making hate blogs that review bad webcomics… there is no point to it, and it just increases traffic to those terrible sites…. It’s how CAD got so popular.

It goes back to “If you have nothing nice to say, don’t say anything”. When applied to webcomics, shuttup about crappy ones, and you won’t contribute to their hits. Instead, talk about good webcomics that you like. Not enough people freely promote good webcomics, such as “Careerists” as you put it. That’s a good word too, I gotta remember it for next time.

I’m of the same opinion. If a person is making a dollar off of something I wouldn’t pay for, more power to them.

Well, guys, I just managed to get around to listening to the Podcast. I’ve listened on and off over the past year. I have to say this is perhaps the best podcast you guys have ever done. I liked the repartee and the thoroughness. Just wanted y’all to know.

Now, about criticism: Fes touched on that subject in the Podcast and above in the comments. Being the guy who does webcomic reviews on The Webcomic Overlook, I gotta disagree.

I understand a little of what he’s saying about not promoting bad webcomics through bad reviews. Hell, Shredded Moose probably gained 90% if its audience due to that Your Webcomic is Bad… review. But I can’t completely say that negative reviews are completely without merit.

One: it benefits the reviewer. There is a peril to doing all good reviews, and it’s that your readers assume that you’re critical of nothing. That devalues positive marks that you give to the good reviews.

Two: Roger Ebert wrote it best on his blog:

I believe a good critic is a teacher. He doesn’t have the answers, but he can be an example of the process of finding your own answers. He can notice things, explain them, place them in any number of contexts, ponder why some “work” and others never could. He can urge you toward older movies to expand your context for newer ones. He can examine how movies touch upon individual lives, and can be healing, or damaging. He can defend them, and regard them as important in the face of those who are “just looking for a good time.” He can argue that you will have a better time at a better movie. We are all allotted an unknown but finite number of hours of consciousness. Maybe a critic can help you spend them more meaningfully.

Notice, when he says “teacher,” he’s not referring to teaching the artist himself but rather guiding the audience.

I suppose I could go on, but this post is getting pretty long for a comment already. 🙂

No, really, thanks for the compliment!

You totally have a point with not only doing good reviews, but I guess I was meaning more of the ultra terrible ones… then again, it can come right down to opinion and subjectivity. But since you quoted Roger Ebert (and I must try to make a joke), I must quote Jay Sherman: “If the movie stinks, just don’t go.”

… the only problem is that people tend to want to see how terrible something is, for themselves 😉

Hey, if you’d like to come on the show sometime and discuss Webcomic Reviewing to some extent, I’d totally be up for it! It’s a played out topic, to be sure, but perspective is always good, and we don’t need to make a whole show out of it, if it isn’t warranted.

Or even if there is another webcomic related topic, that you feel strongly about (even it it may be we disagree), I’m always up for some perspective and experience.

[…] I’d like to follow-up on a discussion I was having with Fes in the comment section of Webcomic Beacon: Episode #61. I felt that this episode, which dealt with the difference between webcomic hobbyists and webcomic […]

What in blue blazes is a “professionalist”?

As far as I’m concerned, this show lost all credibility when you started quoting Ryan Sohmer, the greatest fluke this side of Ctrl+Alt+Del.

Pirate Zim’s *cough* “professional” opinion certainly helps legitimize this particular episode. I was starting to worry with all of the relatively positive responses we were getting.

[…] Episode 61 of The Webcomic Beacon, a Webcomic Podcast, we talk about hobbyist and professionalist approaches to webcomickery… Yes I […]

Ah! Talk about splitting hairs! But it was fun to listen to. I’m a professional hobbyist. No, a hobby proffessionalist, er ah well…